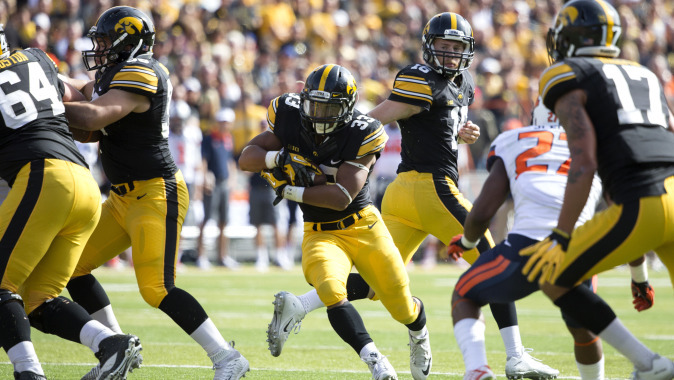 IOWA CITY, Iowa — University of Iowa running back Jordan Canzeri has been named Big Ten Conference Offensive Player of the Week for his performance in Iowa’s 29-20 win over Illinois.

Canzeri led Iowa’s offense in the win over Illinois with 256 rushing yards on 43 attempts. He also had two receptions for 15 yards. He scored twice, including a 17-yard reception in the second quarter and a 75-yard run in the third period.

Canzeri was at his best in the fourth quarter against Illinois, rushing on 11 consecutive plays for 59 yards. Iowa used 6:53 of the quarter to set up a Marshall Koehn field goal after Illinois had pulled within 23-20. Following a fumble recovery, Canzeri added three additional rushing attempts before Koehn sealed the victory with his third field goal of the game.

Canzeri established an Iowa record for rushing attempts in a game, passing the previous mark of 42, which was held by Sedrick Shaw (at Michigan State, 1995). The 256 rushing yards ranks third best for a single game at Iowa.

Canzeri leads Iowa’s rushing attack through six games with 132 attempts for 697 yards and nine touchdowns. His 10 total touchdowns lead the Big Ten and rank seventh nationally. He is 20th in the nation in rushing yards per game (116.2), rushing for over 100 yards in four of six games.