C.J. is the Real McCoy 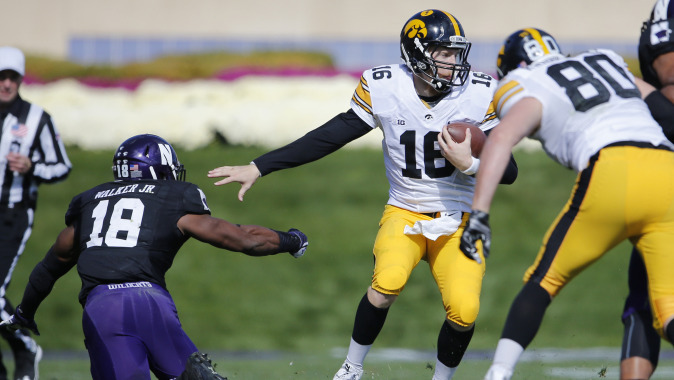 When you are the quarterback and finish on the winning side of your first eight collegiate starts, you get lumped into exclusive company.

It doesn’t have to be Tom Brady or Aaron Rodgers company, but a grandpa from Smokey Corners, West Virginia, or a deputy sheriff in Dodger City, Kansas?

“Talk about resiliency and (C.J.) epitomizes and embodies every bit of that,” UI head coach Kirk Ferentz said after Beathard and the No. 17 Hawkeyes dismantled No. 20 Northwestern, 40-10, on Saturday in Ryan Field. “He was walking like Amos McCoy or Festus back on Monday, Tuesday, Wednesday, but got better as the week went on and that was pure guts on his part.”

Beathard is the first quarterback in University of Iowa history to win his first eight starts. It began Sept. 27, 2014, in West Lafayette, Indiana, with Iowa’s 24-10 victory over Purdue. This season the Hawkeyes have mowed down Illinois State, Iowa State, Pittsburgh, North Texas, Wisconsin, Illinois, and Northwestern. But a string of victories won’t interrupt Beathard’s focus.

“Nah,” Beathard said in his awe shucks demeanor suited for a role on The Real McCoys or Gunsmoke. “All I am worried about is that this team is 7-0 and we’re excited about that.”

Iowa embraces a bye week as its list of limping continues to grow. Beathard was the center of chat room speculation all week after getting banged up Oct. 10 during a 29-20 victory over Illinois. He took few reps in practice, giving way to backup freshman Tyler Wiegers.

“I had limited practice time, but quarterback is such a mental game,” Beathard said. “It is all about mental reps and watching film.

“I’m still a leader of this team and I had to stay strong. Tyler was getting a lot of work and guys were asking me questions about this and that. You have to be with the team mentally as well as physically and help it progress any way you can.”

Poise, toughness, competitive. Ferentz used them all to describe Beathard, who has thrown for 1,415 yards and nine touchdowns this season. He was 15-of-25 for 176 yards against the Wildcats, who were ranked ninth nationally in total defense.

“(Beathard) has a good awareness of what’s going on,” Ferentz said. “When he is under duress, he keeps his focus where it has to be and he has done a great job leading us.”

Ferentz calls game highlights “Kodak Moments,” and one of Beathard’s led to a fourth quarter touchdown to put the Hawkeyes ahead, 33-10. Iowa was faced with third-and-5 from Northwestern’s 35-yard line when Beathard appeared to be flushed from the pocket. He stopped and lobbed a pass to sophomore running back Derrick Mitchell, Jr., who went 23 yards for a first down.

“That wasn’t designed like that,” Beathard admitted. “It was supposed to be a quick flip to (Mitchell), but I didn’t like the way the defensive line was rushing up the field. I ran right and tossed it over the linebacker and it ended up being a good play.”

“We don’t teach that,” Ferentz said. “I would like to say we do, and there are a lot of things we would love to take credit for, but that is just a good player keeping a play alive. Good players do that, so it’s certainly fair to call him a good player.”

It isn’t hard to predict how Beathard will spend the upcoming off week.

“Definitely resting,” he said. “It will be nice to have a Saturday where you can watch other college games and then watch NFL games Sunday.”