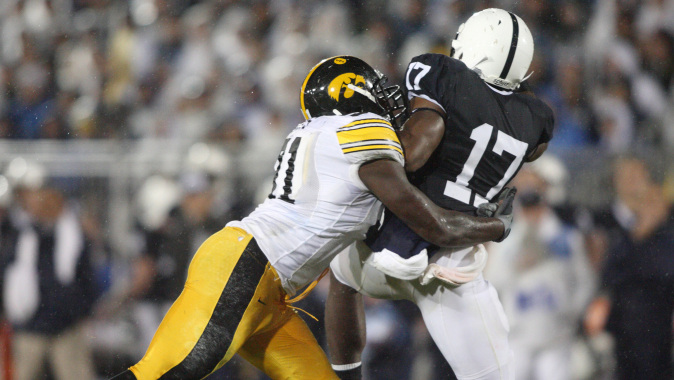 IOWA CITY, Iowa — Now that the University of Iowa football team is off to a 7-0 start, comparisons are being made to the last time the Hawkeyes sprinted to seven straight wins in 2009.

Game 4 (Away)
Sept. 26, 2009
Iowa 21, Penn State 10
Iowa used four second-half turnovers, overcame a 10-0 deficit, and stunned 109,316 fans at Beaver Stadium. The Hawkeyes took the lead for good on Clayborn’s 53-yard blocked punt return in the rain. Angerer made 14 tackles with a forced fumble and interception.

Game 7 (Away)
Oct. 17, 2009
Iowa 20, Wisconsin 10
The Hawkeyes scored 20 unanswered points to win its 11th consecutive game dating back to Nov. 1, 2008. Stanzi completed 17-of-23 passes for 218 yards and a touchdown, Robinson rushed 20 times for 91 yards and a touchdown, and Derrell Johnson-Koulianos caught eight passes for 113 yards. Angerer led the defense with nine tackles and a sack; Amari Spievey intercepted two passes.