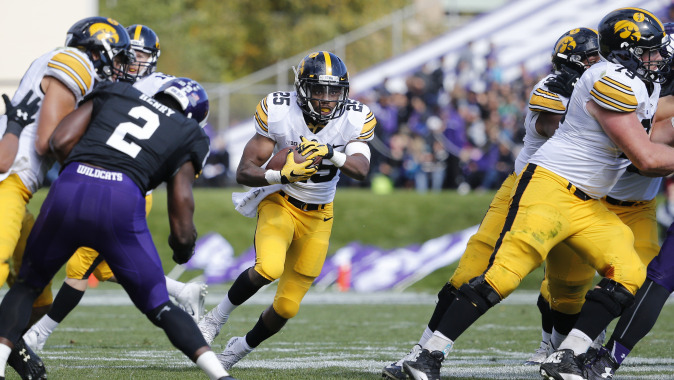 IOWA CITY, Iowa — University of Iowa running back Akrum Wadley has been named Big Ten Conference Offensive Player of the Week for his performance in Iowa’s 40-10 win at No. 20 Northwestern.

The Big Ten honor is the second weekly honor for Wadley (5-foot-11, 185-pounds), a sophomore from Newark, New Jersey (Weequahic HS). Wadley was recognized as Big Ten Freshman of the Week on Nov. 3, 2014, after rushing 15 times for 106 yards and a touchdown in a 48-7 win over Northwestern in Kinnick Stadium.

Wadley is the fifth Hawkeye to earn weekly honors from the Big Ten in 2015. QB C.J. Beathard earned the offensive award following Iowa’s win at Iowa State, PK Marshall Koehn was the special teams winner following Iowa’s last-second victory over Pittsburgh, DB Desmond King earned co-defensive honors for his play in Iowa’s win at Wisconsin, and RB Jordan Canzeri earned the offensive honor for his play in a win over Illinois.

The offensive Player of the Week honor has been awarded to an Iowa Hawkeye following three games, which marks the most offensive winners for the Hawkeyes since 2002, when QB Brad Banks was recognized three times and TE Dallas Clark was honored once.

Wadley entered the Northwestern game late in the first period following a Canzeri injury. His third rushing attempt of the game resulted in a 35-yard score to give the Hawkeyes a 9-0 advantage. He would later score on runs of 4, 2, and 4 yards as Iowa pulled away in the second half.

The 204 rushing yards ties as the 14th best single-game total in school history as he established career bests in rushing attempts, yards and touchdowns. Wadley’s rushing total is the most allowed by Northwestern this season. It marks the first time Iowa has had two players rush for over 200 yards in a game in the same season, and the first time two different players have scored four touchdowns in a game in the same season.

The Iowa offense gained a season-best 492 yards total offense at Northwestern, including 294 net rushing yards, also a season best. The Hawkeyes are averaging 214.4 rushing yards per game and have had three different running backs surpass 100 rushing yards in a game.

Tickets are on sale for Iowa’s three remaining home games, and are available online at hawkeyesports.com, by calling 1-800-IA-HAWKS, or in person at the UI athletics ticket office located in Carver-Hawkeye Arena. There is a $25 youth ticket available for the Maryland and Purdue games.