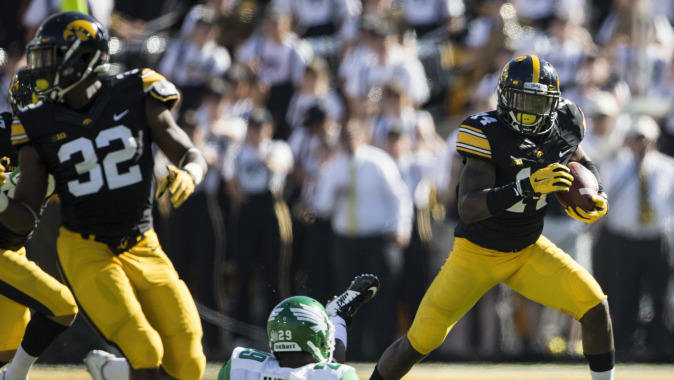 IOWA CITY, Iowa — University of Iowa defensive back Desmond King is one of 16 semifinalists for the 2015 Jim Thorpe Award, given to the top defensive back in college football. The announcement was made Monday by the Oklahoma Sports Hall of Fame.

King (5-foot-11, 200-pounds), is a junior from Detroit, Michigan (East English Village HS). He leads the Big Ten Conference and ranks second in the nation with six interceptions (0.9 per game). King has multiple interceptions in two games, with two thefts in wins over Pittsburgh and Wisconsin.

King is also Iowa’s primary KO and punt returner. He averages 15.7 yards on 10 punt returns to rank second in the Big Ten. He is averaging 22.5 yards on 12 KO returns. He had a key punt return in the fourth quarter in a win at Iowa State. He later had an interception against Iowa State that led to Iowa’s final touchdown.

The Jim Thorpe Award was established in 1986 and is named after history’s greatest all-around athlete, Jim Thorpe, and is presented by the Oklahoma Sports Hall of Fame and Jim Thorpe Association in Oklahoma City. Thorpe excelled at every sport in which he competed, including football, at which he played on the offensive and defensive side of the ball. The three Thorpe Award finalists will be named on Nov. 23, with the winner being announced at the Home Depot College Football Awards Show on Dec. 10 (ESPN). The winner of the 2015 Thorpe Award will be honored at a banquet in Oklahoma City on Feb. 2, 2016.

Tickets are on sale for Iowa’s three remaining home games, and are available online at hawkeyesports.com, by calling 1-800-IA-HAWKS, or in person at the UI athletics ticket office located in Carver-Hawkeye Arena. A $25 youth ticket is available for home games vs. Maryland and Purdue (Nov. 21).