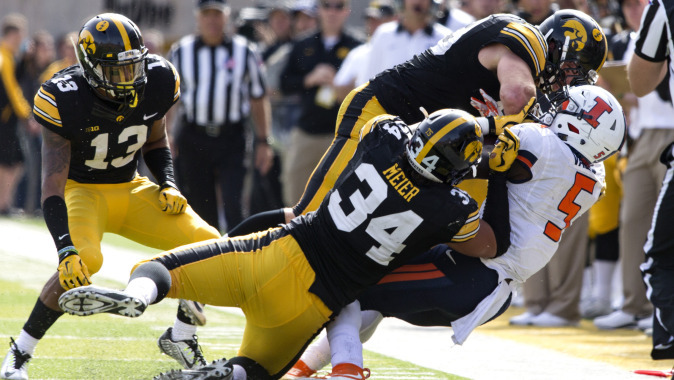 IOWA CITY, Iowa – University of Iowa senior defensive end Nate Meier is one of 32 players named to the midseason Watch List for the 14th edition of the Ted Hendricks Award. The list was released Monday afternoon by the Ted Hendricks Foundation.

The Ted Hendricks Award is named in honor of college football’s first three-time first-team All-American. As a defensive end at the University of Miami, Hendricks used his agility, height and reach to block passes and kicks, force interceptions and pressure quarterbacks and running backs. He roamed the front line, read plays and blitzed on impulse, completely transforming the defensive end position.

Meier (6-foot-2, 252-pounds), is a senior from Tabor, Iowa (Fremont-Mills HS). He ranks fourth on the team with 42 tackles, including 17 solo tackles and 25 assists. Meier leads Iowa in sacks (6-30) and is second in tackles for loss (7-42). He has forced one fumble and recovered one fumble, to go with one pass break-up.

Hendricks’ professional career spanned 15 years and 215 consecutive games. It included four Super Bowl victories, eight Pro Bowl selections and inductions into the College and Pro Football Halls of Fame. It is in the spirit of Ted Hendricks’ aggressive style of play, winning attitude and determination that the Defensive End of the Year Award for college football’s premier defensive end is presented.

On-field performance, exceptional winning attitude, leadership abilities, contributions to school, and community and academic preparedness are some of the criteria used to determine the Award’s winner. Members of the national media, head coaches, professional scouts and former winners are included in the Award’s voting committee. Candidates may represent any class (freshman through senior), as well as any four-year NCAA accredited school. The candidate’s primary position must be defensive end.

Tickets are on sale for Iowa’s three remaining home games, and are available online at hawkeyesports.com, by calling 1-800-IA-HAWKS, or in person at the UI athletics ticket office located in Carver-Hawkeye Arena. A $25 youth ticket is available for home games vs. Maryland and Purdue (Nov. 21).