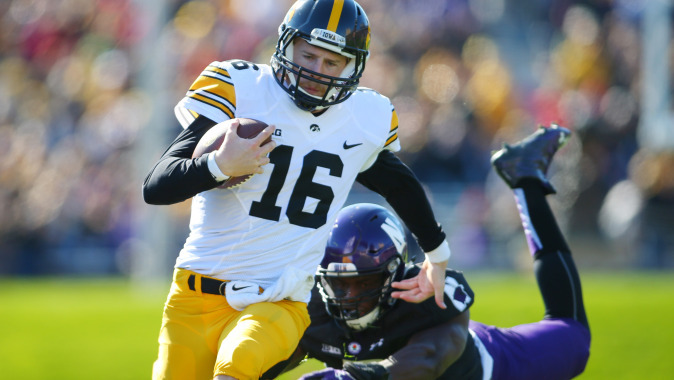 IOWA CITY, Iowa — The big picture noise continues growing for the University of Iowa football team and the Hawkeyes are steadfast at staying in the present.

Iowa climbed into the top 10 — coming in at No. 10 — in The Associated Press poll for the first time since 2010 following its bye week and the team is ranked 11th in latest USA Today Coaches’ Poll. The Hawkeyes — 7-0 overall — are one of 12 undefeated teams remaining across the college football landscape.

“There is a lot of positive noise going on out there, and you can’t let that get to your head,” said junior quarterback C.J. Beathard. “You have to maintain focus, and we’re handling it well.

“Coach (Kirk) Ferentz has done a good job of making sure we focus on our next opponent.”

With the College Football Playoffs rankings set to debut one week from today, the Hawkeyes are certainly on the committee’s radar. With a two game lead in the Big Ten’s West Division, Iowa’s start and rise is becoming the talk of the nation.

“It’s crazy to think about because a lot of people didn’t have a lot of faith in us (at the beginning of the season),” said senior linebacker Cole Fisher. “You can’t get caught up in that, we have five games remaining and that’s a long ways to go. You have to take it one game at a time and make sure you don’t look past anyone.

“(The media attention) causes more distractions. When we were flying under the radar, it made it easier to not get caught up in the media. We have to focus.”

Fisher says the team’s confidence has grown steadily week-by-week. It started with a rivalry win at Iowa State before the dramatic walk-off victory against Pittsburgh (it is the Panthers’ only loss of the season). Fisher believes winning on the road against Wisconsin legitimized the team’s progress.

“When we played at Wisconsin, I was like `Let’s see how good this team really is,'” he said. “Then we played at Northwestern when we had a bunch of guys banged up. That was another test. Passing tests each week you learn about yourself and it builds our confidence week-after-week.”

Beathard isn’t worried about the Hawkeyes losing momentum coming off the bye week. The break in action came at an ideal time, giving the team a chance to get healthy from seven weeks accumulating bumps and bruises.

“We needed a bye week more than anything,” said Beathard. “Hopefully we’ll pick up right where we left off, that’s what we want to do. We have to go out, execute, and keep our focus.

“Right now it’s Maryland. We want to win this game and when next week presents itself we want to win that. We hold our own destiny right now, we know that, and we have to take it week-by-week.”

Saturday’s game is slated for a 2:30 p.m. (CT) kickoff inside Kinnick Stadium. Tickets are available through the UI Athletics Ticket Office on hawkeyesports.com or (800) IA-HAWKS. The game will be televised on ABC with a reverse mirror on ESPN2.

Maryland has lost four straight games to drop its record to 2-5 overall, 0-3 in Big Ten play. The Terrapins defeated Iowa, 38-31, in the first ever meeting last season in College Park, Maryland.