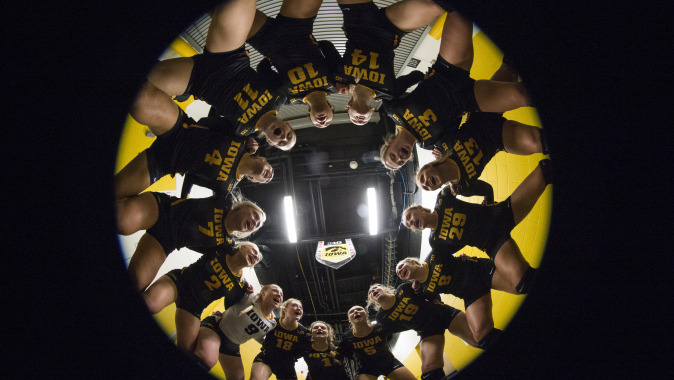 THIS WEEK
The University of Iowa volleyball team hosts a pair of Big Ten contests in Carver-Hawkeye Arena this weekend. The Hawkeyes face Maryland on Friday, Oct. 30, before hosting Rutgers on Saturday, Oct. 31.

WATCH
Friday’s contest will be streamed live online via BTN Plus. To see if your cable package gives you access to BTN Plus content, sign up for BTN Plus or learn more about it, visit btn2go.com. Saturday’s match will be available for live streaming on Hawkeye All-Access at hawkeyesports.com.

SCHEDULE UPDATE
Saturday’s match against Rutgers has been moved to 7:30 p.m. (CT). The start time was pushed back due to Iowa football’s 2:30 p.m. kickoff against Maryland.

PARKING
Parking will be available in Lot 33, Lot 46/47, and Lot 75 on Friday (vs. Maryland at 7 p.m.), and Lot 46/47 and Lot 75 Saturday (vs. Rutgers at 7:30 p.m.). Heavy traffic around Kinnick Stadium and Carver-Hawkeye Arena is expected on Saturday. Hawkins Drive directly east of the stadium will be closed for an hour following the end of the football game.

QUICK HITTERS
? For the first time since Sept. 19, the Hawkeyes will host opponents that are not ranked or receiving votes in the latest American Volleyball Coaches Association (AVCA) Top 25 Poll.
? Senior Mikaela Gunderson has already surpassed her 2014 kills total. Through 23 matches, Gunderson has 169 kills (2014: 110).
? Gunderson tallied a team-leading 11 kills against No. 9 Minnesota on Oct. 24 — seven of her 11 kills came in the third set.
? Freshman Reagan Davey notched her second career double-double against No. 9 Minnesota on Oct. 24. The Ocala, Florida, native recorded 11 kills and 10 digs in the contest. Davey’s first career double-double came against No. 24 Michigan on Oct. 7 (21 kills, 12 digs in five sets).

UP NEXT
The Hawkeyes travel to Bloomington, Indiana, to take on the Hoosiers on Wednesday, Nov. 4.