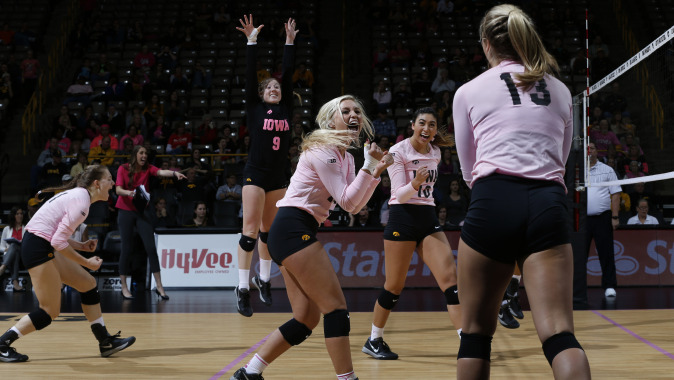 THIS WEEK
The University of Iowa volleyball team travels Bloomington, Indiana, for a contest against the Hoosiers on Wednesday, Nov. 4. First serve is set for 6 p.m. (CT)

ON THE B1G BOARD
The Hawkeyes recorded their first Big Ten win of the season on Saturday, Oct. 31, defeating Rutgers in straight sets (25-20, 25-19, 25-20). Junior Lauren Brobst paced the Hawkeye offense with 11 kills, while sophomore Taylr McNeil added a career-high nine. Junior Loxley Keala dished out 34 assists, and sophomore Annika Olsen registered a career-high 26 digs — 11 of which came in the third set.

QUICK HITTERS
• Sophomore Annika Olsen registered a career-high 26 digs against Rutgers on Oct. 31. Eleven on her 26 digs came in the third set.
• Taylr McNeil tallied a season-high nine kills against Rutgers on Oct. 31. The sophomore also registered 10 digs.
• Loxley Keala registered her third double-double of the season against Maryland on Oct. 30. The junior recorded 50 assists and tied her season-high with 13 digs in the match. Keala also recorded double-doubles against Hawaii (26 assists, 13 digs) on Sept. 4 and American (46 assists, 13 digs) on Sept. 6.
• Sophomore Jess Janota was just one kill shy of tying her career high against Maryland on Oct. 30. Janota led the Iowa offense with 19 kills and a .516 hitting percentage.
• Freshman Reagan Davey notched her second career double-double against No. 9 Minnesota on Oct. 24. The Ocala, Florida, native recorded 11 kills and 10 digs in the contest. Davey’s first career double-double came against No. 24 Michigan on Oct. 7 (21 kills, 12 digs in five sets).
• Four Hawkeyes reached double digits in digs against Maryland on Oct. 30. Sophomore Annika Olsen led the team with 21, while freshmen Libby Koukol (16), freshman Reagan Davey (14), and junior Loxley Keala (13) also reached double digits. The Hawkeyes tallied a season-high 80 digs in the match.
• Senior Mikaela Gunderson has already surpassed her 2014 kills total. Through 25 matches, Gunderson has 184 kills (2014: 110).

ON THE RADIO
Ten of Iowa’s 20 Big Ten Conference matches will air live on KXIC Radio this season. Second-year play-by-play announcer Tim Keating will call the action. Audio for all of Iowa’s home and away matches is available online as part of the premium content package on Hawkeye All-Access at hawkeyesports.com.

UP NEXT
The Hawkeyes remain on the road, traveling to West Lafayette, Indiana, to take on Purdue on Nov. 7.