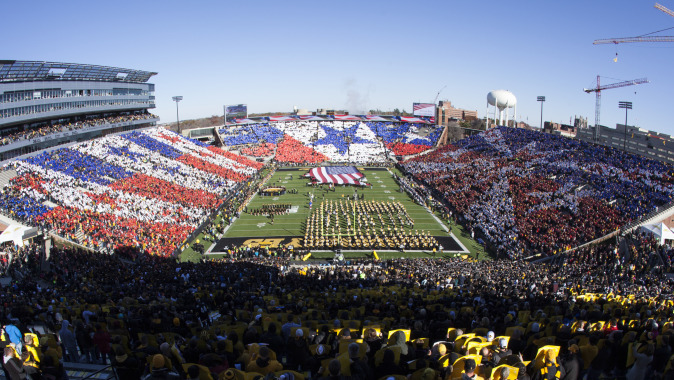 Saturday’s game against Minnesota is designated as Military Appreciation Day in honor of Veterans Day. The UI and its Veterans Association has organized events to honor veterans associated with the university and Hawkeye community.

UI students Jacob Stone and Sheena Anderson were among the participants in a Veterans Association 280-mile ruck march that brought the game ball from TCF Bank Stadium in Minneapolis to Kinnick Stadium to raise awareness for veteran suicide. Stone is a veteran of the U.S. Marines, Anderson is a U.S. Army veteran.

Participants marched in teams of three while carrying ruck sacks weighing 22 pounds, a symbol of the 22 veterans who take their own lives by suicide each day. The 57 members of the ruck march will form the tunnel the Hawkeyes swarm through onto the field for Saturday’s game.

The on-field events come on the heels of a Tickets for Troops initiative that was rolled out earlier this fall. The UI partnered with fans, giving them an option to purchase tickets at a reduced price and donate them to active duty and veteran military members to attend Saturday’s game at no cost.

The battle for the Floyd of Rosedale begins at 7:12 p.m. (CT). The game, which is sold out, will be televised on BTN.