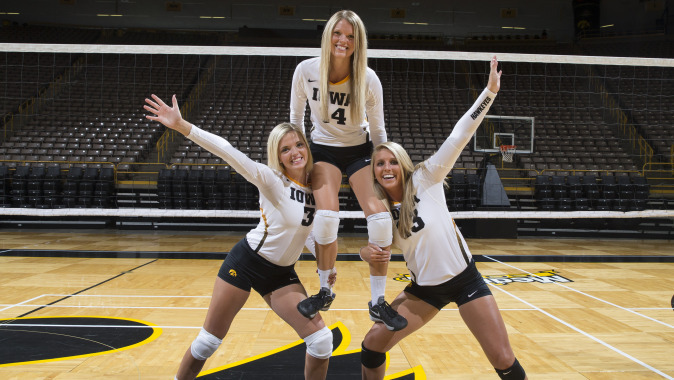 THIS WEEK
The University of Iowa volleyball team hosts Northwestern in its home finale Saturday, Nov. 21. First serve is set for 7 p.m. (CT) in Carver-Hawkeye Arena.

SENIOR NIGHT
Three Hawkeye seniors — Mikaela Gunderson, Erin Radke, and Alli O’Deen — will play their final home game in Carver-Hawkeye Arena on Saturday night. The three will be honored in a ceremony before the game. Fans are also invited to attend a senior banquet in the Feller Club Room located on the fourth floor of Carver-Hawkeye Arena.

ALUMNI DAY
Saturday is Alumni day. Fourteen former student-athletes and coaches will be honored with a ceremony between sets two and three.

STRENGTH OF SCHEDULE
According to the NCAA, the Hawkeyes have the fourth-strongest strength of schedule in Division I Volleyball — the second highest ranking among Big Ten opponents. Northwestern (2nd), Minnesota (6th), Wisconsin (8th), and Ohio State (10th) also made the top 10.

KEALA MAKES HISTORY
Loxley Keala recorded her 1,000th assist against Purdue on Nov. 7. The junior’s 1,147 assists rank eighth on Iowa’s all-time career assists list. Janet Moylan (1987-90) holds the school record with 5,471 career assists. Keala has started every match and every set as Iowa’s setter this season. The Kaneohe, Hawaii, native has registered 50 or more assists seven times this season, including a career-high 64 against Michigan on Oct. 7.

STUDENT-ATHLETE OF THE MONTH
Sophomore Annika Olsen along with Desmond King (football) and Madison Waymire (cross country) were named October student-athletes of the month last week. The award honors University of Iowa student-athletes who display excellence in athletics, academics, and community service, as voted on by their peers. Olsen led the team with a 5.23 digs per set average during the month of October. The Johns Creek, Georgia, native currently leads the Big Ten with a 4.74 digs per set average. She reached double digits in digs in all 10 October matches, including a career-high 26 in Iowa’s win over Rutgers on Oct. 31.

QUICK HITTERS
• Junior Loxley Keala is now eighth on Iowa’s all-time career assists list. The junior transfer has 1,147 assists in her career (at Iowa).
• Senior Mikaela Gunderson leads the team with a .338 attack percentage this season, and a 9.77 blocks per set average. Her attack percentage ranks sixth in the Big Ten.
• Junior Alyssa Klostermann has 994 career assists — six assists away from 1,000.
• Reghan Coyle has registered a new career high in kills in three of the last four matches. The freshman recorded a career-high nine kills against Ohio State on Nov. 18. She also set a new career high in blocks with three (1 block solo, 2 block assists). Coyle has started the last five matches for the Hawkeyes.
• Sophomore Annika Olsen has 498 digs on the season — just two digs away from 500. She will become just the seventh Hawkeye to record 500 digs in a single season.

IN THE BIG TEN – INDIVIDUAL RANKINGS
• Sophomore Annika Olsen leads the Big Ten in total digs (498) and digs per set average (4.74).
• Junior Loxley Keala leads the conference in total assists (1,147).
• Keala has the fifth-best assist per set average in the Big Ten (10.92).
• Senior Mikaela Gunderson owns the sixth-highest hitting percentage in the conference (.338).

UP NEXT
The Hawkeyes travel to College Park, Maryland, for a Big Ten contest against the Terrapins on Wednesday, Nov. 25. First serve is set for 6 p.m. (CT).