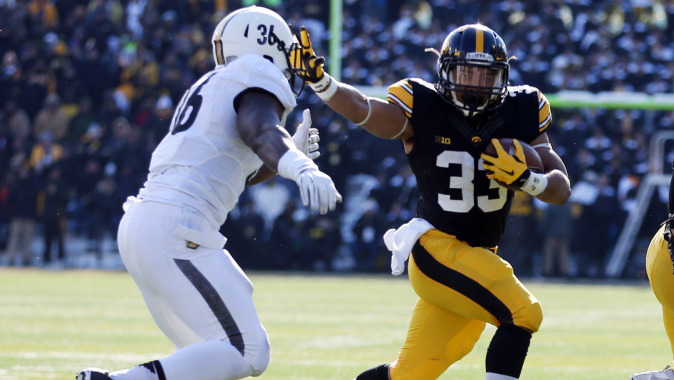 IOWA CITY, Iowa — Kirk Ferentz was in his first season as offensive line coach at the University of Iowa in 1981 when the Hawkeyes had a chance to clinch the Big Ten Conference title in their final game in Kinnick Stadium.

It was cold (30 degrees). The Hawkeyes jumped to a 16-0 lead. Things got rocky. Iowa persevered, won big, and went on to play in its first Rose Bowl in 23 years.

On Saturday, with Ferentz in his 17th season as head coach at the UI, the Hawkeyes had a chance to clinch the Big Ten West Division title in the final home game of the season.

It was cold (27 degrees). The Hawkeyes jumped to a 20-0 lead. Things got rocky. Iowa persevered, won big, and will go on to play in its first Big Ten Championship game.

“The feeling and the weather were very similar,” Ferentz said after Iowa defeated Purdue, 40-20, to improve to 11-0 on the season, 7-0 at Kinnick Stadium. “It was a cold, gray day.”

Ferentz remembers Iowa fans in the crowd keeping tabs on the Ohio State-Michigan game by watching an ABC feed on portable televisions.

“We kind of knew what was going on between Ohio State and Michigan,” Ferentz said. “Maybe my memory is skewed, but I remember us kind of getting tight once we knew.”

Iowa led 16-0 when the result of the Ohio State-Michigan was announced. The Spartans cut the lead to 16-7 at halftime. UI defensive back Lou King made one of his two interceptions and the Hawkeyes rode the legs of running back Phil Blather for 247 yards (180 coming in the second half). Blatcher started the season as the team’s No. 3 running back.

“That game got a little bumpy, too,” Ferentz said. “Then Lou King made a big play defensively and that uncorked it. Then Phil Blatcher just took off.”

Against Purdue, Iowa saw its 20-0 lead shrink to 20-13 before breaking the game open late. The final touchdown was scored by running back Jordan Canzeri, who gained 70 of his 95 yards in the second half. Like Blatcher, Canzeri did not start the season as Iowa’s starting running back.

For better or worse, the landscape of college football and its bowl structure has changed during the last 34 years. The Hawkeyes finish the regular season on Black Friday against Nebraska (5-6 overall, 3-4 Big Ten), then play in the Big Ten championship game on Dec. 5 in Indianapolis. As Ferentz and the Hawkeyes discovered in 2002, winning the Big Ten Conference no longer guarantees a New Year’s Day clash with the Pac-12 champion in Pasadena, California.

“We didn’t have roses coming out of the press box,” Ferentz said of Iowa’s most recent milestone win.