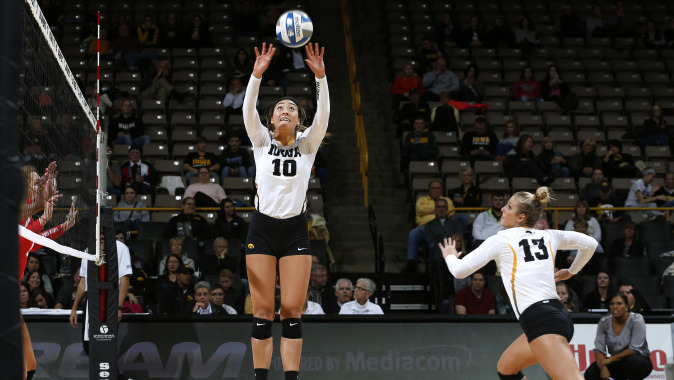 COLLEGE PARK, Md. — The University of Iowa volleyball team fell to Maryland, 3-1, Wednesday evening at the XFINITY Center. The Hawkeyes fall to 12-20 on the season and 2-17 in Big Ten action with the loss.

“Once again we came out hot and weren’t able to sustain the momentum all the way through,” said UI head coach Bond Shymansky.” The third set was so tight, and coming up short there was really the back breaker for our group. I’m pleased that they fought hard all the way to the end. As a team we feel like we have fallen short of the goals we have accomplished this season, but we are going to have to regroup and do better on Saturday night at Michigan State.”

The Iowa offense came out swinging in the first set, using a 7-1 run to get out to a 13-6 lead. Juniors Ashley Mariani (2) and Loxley Keala (1), and freshman Reghan Coyle (2) each added kills to the rally, while Mariani and Keala combined for a block. Maryland fought back to pull within three (20-17), but three straight kills by Coyle (1) and junior Lauren Brobst (2) sealed the 25-20 set victory for the Hawkeyes. Brobst led the Hawkeyes with four kills in the set, while Keala dished out 12 assists. Sophomore libero Annika Olsen registered 10 digs for the Iowa defense.

Maryland capitalized on a pair of service aces and three straight kills to get out to an early 6-1 advantage in the second set. The Hawkeyes fought back with a five-point run on kills from senior Mikaela Gunderson, Keala and Coyle to pull within one (10-9) and force a Terrapin timeout. Maryland responded; however, using a 4-0 run of its own to establish distance and eventually take the set, 25-21.

The Terrapin’s got out to an early 5-2 lead in the third set, before the Hawkeyes used an eight-point swing to take a 12-7 lead. Olsen served the rally, while Gunderson (1) and Mariani (2) added kills. Maryland fired back, scoring four straight points to eventually tie the game, 15-15. It was a back-and-forth battle from there until the Terrapins used a block and a kill to win the set 29-27.

Maryland grabbed an early lead on a 7-2 run in the fourth set and never lost it. The Hawkeyes fought back late to pull within six, but could not slow the Maryland momentum as the Terrapins went on to win the set 25-18. The Maryland block proved to be an issue for the Hawkeyes as the Terrapins recorded eight of their 16 team blocks in the set.

Coyle led the Iowa offense with a career-high 11 kills, while Mariani (10) and Brobst (10) also reached double digits. Keala paced the team with 41 assists and a career-high six blocks. Olsen posted a team-high 24 digs.

The Hawkeyes travel to East Lansing, Michigan, for their 2015 season finale against the Spartans on Saturday, Nov. 28.