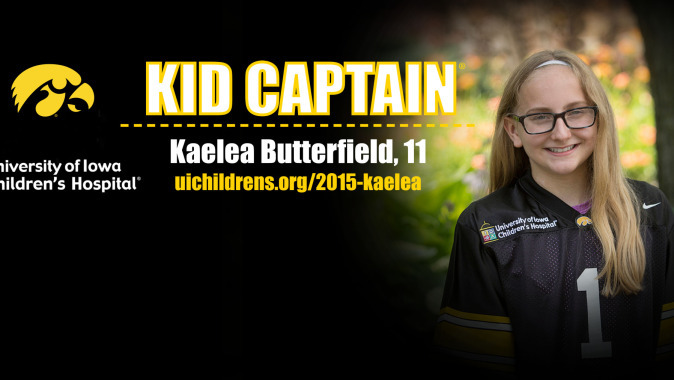 IOWA CITY, Iowa — At a young age, Kaelea Butterfield had problems breathing. After she was hospitalized five different times because of breathing trouble, her doctor prescribed breathing treatments.

When she was in kindergarten, a teacher noticed Kaelea wasn’t breathing well and sent her to the school nurse. When multiple treatments didn’t help, the nurse called 911.

“There were probably 12 medicines running through all of the IVs,” remembers Kaelea’s mom, Kristin. “They were hitting her with a bunch of EpiPens® [epinephrine injections to open airways in the lungs] on the way to the hospital and nothing was working. She started to go into shock.”

Kaelea went to a Cedar Rapids hospital, but was soon airlifted to University of Iowa Children’s Hospital for more specialized pediatric emergency care.

“The hospital in Cedar Rapids had no clue what to do with her,” recalls Kristin. “If it wasn’t for UI Children’s Hospital, she wouldn’t be alive right now.”

Two years later, in June 2012, Kaelea was rushed back to UI Children’s Hospital under dire circumstances. Her symptoms had become so severe that by the time she arrived at the emergency department, no medications helped.

“There were probably 25 doctors in the room,” says Kristin.

Kaelea required life support and was put on ECMO, or extracorporeal membrane oxygenation, which drains blood from veins, adds oxygen and removes carbon dioxide, and then pumps blood back through the body.

“Seeing Kaelea on ECMO was probably one of the most devastating events we’ve ever been through with any of our children or grandchildren,” says Victoria Meggers, Kaelea’s grandmother.

While Kaelea was in the hospital, pediatric pulmonologist Timothy Starner, M.D., trained her family how to administer an inhaler and breathing treatments. He also taught them signs that indicate a breathing struggle, including rosy cheeks and sucked-in skin at her ribcage.

Kaelea was on ECMO for more than a week, and spent 13 days in the hospital before she was able to return home. Today, she’s an outgoing 12-year-old who loves to paint her nails and play with her younger brother, Kohen, and little sister, Kintzee.

She’ll have to take daily medications and pay attention to her symptoms and overall health for the rest of her life, but Kaelea and her family are thankful they have a team of UI Children’s Hospital specialists ready if they need them.

“Bringing my daughter to the medical staff in Iowa City was by far one of the best choices I could have ever made,” says Kristin. “They exhausted every option possible.”

“It was a life-changing experience for all of us,” adds Victoria. “They saved her life — that means everything to us.”