Ferentz Named Finalist for 2 Coach of the Year Awards 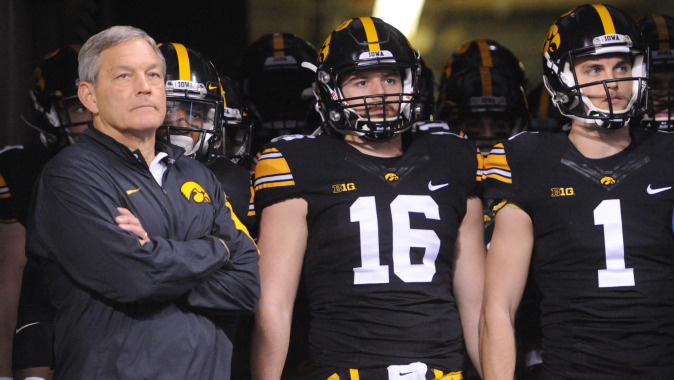 The finalists were placed on a ballot sent out to the entire FWAA membership Monday. The winner will be revealed on Wednesday, Dec. 16. The official presentation reception will be held Jan. 9, 2016, in Scottsdale, Arizona, during a reception at the media hotel at the College Football Playoff National Championship.

The FWAA has presented a coaching award since 1957. In 1997, the national coach of the year award was named in honor of the late Eddie Robinson, a coaching legend at Grambling State University for 55 seasons. This is the third time Ferentz has been a finalist for the award (2002 and 2004).

Ferentz joins Dantonio and Swinney as finalists for the 2015 George Munger Collegiate Coach of the Year Award. The winner will be announced on Dec. 21, and a formal prestantion will take place at the 79th Maxwell Awards Gala on March 11, 2016, in Atlantic City, New Jersey. Eligible voters include, NCAA Bowl Subdivision head coaches and football sports information directors, Maxwell Football Club members, and selected national media.

The George Munger Coach of the Year award is named after former University of Pennsylvania coach George Munger for his devotion to ethics in athletics and his commitment to education. This is the first time Ferentz has been named a finalist for the award.

Ferentz was recognized as the American Football Coaches Association (AFCA) Region 3 Coach of the Year earlier Monday, and named Big Ten Conference Coach of the Year for the fourth time in his career on Dec. 1.

The Eddie Robinson Award and the George Munger Award are both members of the National College Football Awards Association (NCFAA). The NCFAA encompasses the most prestigious awards in college football. The 22 awards boast more than 700 years of tradidtion-selection excellence.