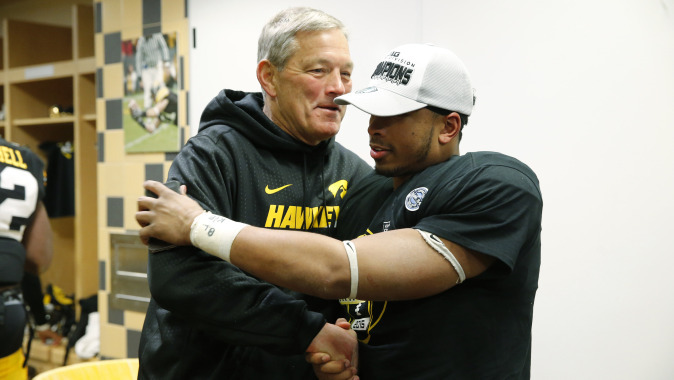 IOWA CITY, Iowa — University of Iowa head football coach Kirk Ferentz has been named the 2015 Woody Hayes Coach of the Year. The announcement was made Tuesday by the Touchdown Club of Columbus.

The Woody Hayes Award, named for former Ohio State coach Woody Hayes, has recognized the nation’s top coach each year since 1977. The award is voted on by the Touchdown Club’s committees consisting of coaches, sportswriters, and former players. This is the first time Ferentz has won the award.

The award will be presented at the 61st Touchdown Club of Columbus Awards on Feb. 6, 2016 in Columbus, Ohio.

The Hawkeyes began the season unranked before moving into the top 25 following a 10-6 win at Wisconsin. Iowa steadily climbed in the rankings and was ranked as high as fourth in the CFP rankings.

Ferentz ranks seventh in the Big Ten Conference in conference wins (76) and eighth in total wins (127). He has led Iowa to 13 bowl games in the last 15 seasons, including eight January bowl events.

For more information of the Woody Hayes Award and the Touchdown Club of Columbus, visit www.tdccolumbus.com.