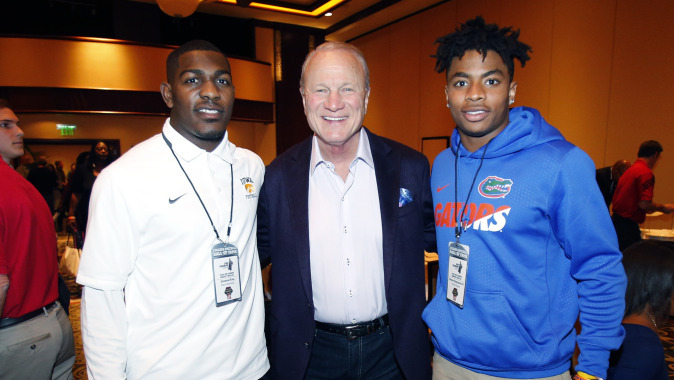 ATLANTA — There isn’t a football coach alive who wouldn’t drool at seeing Desmond King, Delano Hill, Khalid Hill, Jourdan Lewis, and Malik McDowell on the field at the same time.

But that was nearly an everyday occurrence a decade or so ago in west Detroit.

King is a junior cornerback at the University of Iowa, where he was named First Team All-Big Ten Conference and received the Tatum-Woodson Award as the league’s top defensive back. The Hills and Lewis play at Michigan and McDowell is at Michigan State.

“It is a great experience when you get that chance to go outside with friends like that,” King said. “We all grew up together playing pickup football in the neighborhood. We had a strong bond growing up and it’s amazing that we are all in the positions we are right now.”

King’s accomplishments have trumped those of his childhood buddies this season. He is one of three finalists for the Jim Thorpe Award, recognizing the top defensive back in the nation. King is joined at The Home Depot College Football Awards by Duke senior Jeremy Cash and Florida junior Vernon Hargreaves III.

Most Hawkeye fans would agree with King when he says his highlight was an 88-yard interception return for a touchdown during a 31-15 win against Maryland on Oct. 31 in Kinnick Stadium.

“Whenever you get a Pick 6, it is memorable,” King said with a smile.

That’s why he won’t have trouble remembering his first interception as a collegian — a 25-yard Pick 6 against Nate Sudfeld of Indiana during Iowa’s 45-29 victory Oct. 11, 2014.

King added two other interceptions as a sophomore and has 11 in 39 games as a Hawkeye.

This season he added something new to his repertoire: the title of return specialist.

“It’s an opportunity to make a play for the team,” King said. “Special teams have a big effect on the outcome of games. I have the opportunity to put our offense in good field position and try to put points on the board.”

King has been a champion at about everything he tries. He was a member of the East English Village 4×400-meter relay team that won the Division 2 state title in Michigan’s Lower Peninsula; he also competed in wrestling.

But King always knew his primary sport was football and his primary position was defensive back, despite rushing for 2,360 yards and 33 touchdowns as a high school tailback. As a lockdown cornerback, King intercepted a state-record 29 passes.

Yet no Division I programs offered a scholarship, saying he was too small or too slow.

“People didn’t know I had the speed to cover the ball and cover the field,” King said. “What can I say? I’m a football player, so I go out, keep improving, and play the best I can at any position.

“You have to stay patient and be humble. Keep praying and thank God for whatever you get and it will work out.”

King committed to Ball State, then switched to the Hawkeyes a week before National Letter of Intent Signing Day. It didn’t take long for King to get on the field. When starting cornerback Jordan Lomax went down with an injury in the season-opener against Northern Illinois on Aug. 31, 2013, it was King’s turn.

“I was pretty much lost once my named was called,” King said. “I was shell-shocked that I was finally on the field as a freshman. I was still in the learning process and didn’t know anything.

“It was a dream come true getting out there with teammates and family. The seniors gathered me around them to get familiar with the playbook and get acclimated to the field and make sure I didn’t get overwhelmed by anything.”

King progressed to the point that when Lomax regained health, he moved to safety and King stayed at cornerback. There were never hard feelings. The two are now partners in a hard-hitting Hawkeye secondary that takes on No. 6 Stanford on Jan. 1 in the Rose Bowl Game.

“Jordan is not a selfish player at all,” King said. “He is helpful and a great leader. We take pride in Jordan out there setting examples for the younger guys on the field.”

After a fantastic junior season, the awards are pouring in. Twenty-four stars of the 2015 season, including King, will be on hand for the 25th annual College Football Awards show Dec. 10, a two-hour made-for-TV event that will be televised live on ESPN starting at 6 p.m. (CT). A red carpet special will air on ESPNU beginning at 5 p.m.

“You may never know when your time will come,” King said. “This is a dream come true. The people I looked up to were big-time corners like Darqueze Dennard (of Michigan State), Charles Woodson (of Purdue), and Patrick Peterson (of Louisiana State). I wanted to form my game like those guys.”

These days, aspiring youth football players nation-wide are modeling their style after King. But it’s a safe bet he is idolized most in that old neighborhood in west Detroit.