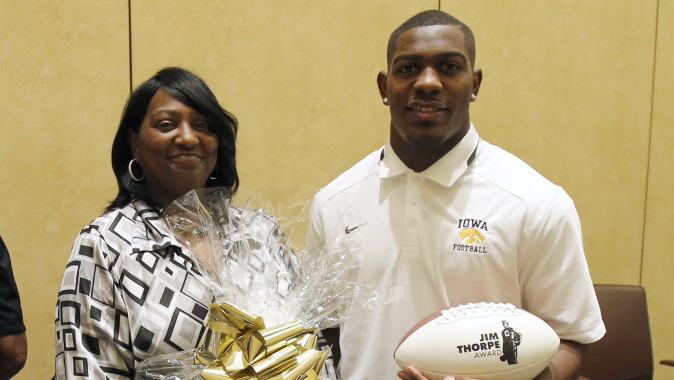 ATLANTA — Behind every great person is a great mother.

Meet Yvette Powell. She is Desmond King‘s mother. If Hawkeye fans think Desmond is great, get a load of his mom.

Yvette, who turns 45 later this month, was born, raised, and spent her entire life in Detroit. She raised four boys and stressed education so much that she volunteered at elementary school every day for all of them.

“I did it to make sure they all got an education,” Yvette said Thursday at The Home Depot College Football Awards Show.

It’s hard for Yvette to look back on Desmond’s life without wiping away a tear or two. She said Desmond has come a long way from a kindergarten tot who needed what seemed to be around-the-clock supervision.

“I had to sit in the classroom with him,” Yvette said. “He used to get put on the purple rug because he couldn’t stop talking. We had our trials with him in school and it came to the point where I would just volunteer up there. I had my own desk and my own cup of coffee every morning with him at that school.”

To Yvette, an education — not solely football — is a key to prosperity. She stresses that everyone — even the best defensive back in the Big Ten Conference — can profit from a college diploma.

“I believe in education first because anything can happen to you, God forbid,” Yvette said. “I want Desmond to have something else to fall back on besides football.”

Desmond got his start in athletics because of his mother, or more specifically, his mother’s congested house. When you take four boys and add their friends, it didn’t take long for Yvette’s Detroit home to become cramped.

“So I would put them outside and give them a baseball, basketball, anything to keep them busy,” Yvette said. “Desmond took to it.”

When Desmond was 5-years-old, Yvette noticed two things about her son: he had large hands and he liked to tackle everybody. A situation at a basketball camp was all the proof Yvette needed to pull Desmond off the court and onto a football field.

“We took him to a basketball camp and he tackled the poor baby on asphalt,” Yvette said. “So we took him back to the football field. I had to explain to him that he couldn’t do that (in basketball), but that’s how he got started in football.”

Desmond and neighborhood friends didn’t have football jerseys, so they stuffed cardboard under T-shirts to simulate shoulder pads.

“It was especially fun in the winter when the snow was coming down and in the fall when the leaves were on the ground,” Desmond said. “We bundled up in a lot of coats and piled up leaves so we could play in them.”

Yvette says when Desmond turned 11, she knew that if he focused on athletics he could “get it.” He has been getting after it ever since. Desmond set a Michigan High School state record with 29 career interceptions but he didn’t get a coveted scholarship offer from a Big Ten Conference program right away, so he committed to Ball State.

“I told him not to commit so fast because God has something special for you,” Yvette said. “When he looked up, Iowa was right there, just like I told him. To see Iowa give him that chance tells me it was meant for him to be there.”

Yvette didn’t miss any of Desmond’s games when he was growing up; she went to all seven games inside Kinnick Stadium this season. Every mom has a favorite play by her son and Yvette’s was when Desmond body-slammed a Wisconsin ball carrier to the Camp Randall turf during a 10-6 Hawkeye victory Oct. 3.

“That was his wrestling move,” Yvette said. “The 88-yard touchdown (against Maryland) was a blessing. The whole season — watching the whole team pull together and play as one — still gives me chills.”

And for a mother who couldn’t resist spending every day at elementary school with her children, Yvette had no qualms sending Desmond to Iowa City, Iowa, to become a student-athlete under head coach Kirk Ferentz and his staff.

“The people at the University of Iowa are like family; I love the whole football team,” Yvette said. “It’s like I’m team mom all over again because I was team mom for Desmond from age 5 all the way through high school. I love it and it brings me joy that my baby is being taken care of down there by Iowa folks and I have nothing to worry about with him not being at home.”

Twenty-four stars of the 2015 college football season, including Desmond King, will be on hand for the 25th annual College Football Awards show Thursday, a two-hour made-for-TV event that will be televised live on ESPN starting at 6 p.m. (CT). A red carpet special will air on ESPNU beginning at 5 p.m.

Yvette will be in attendance, but without her own desk and cup of coffee. They aren’t needed anymore.