A Rosy Evening in Coralville 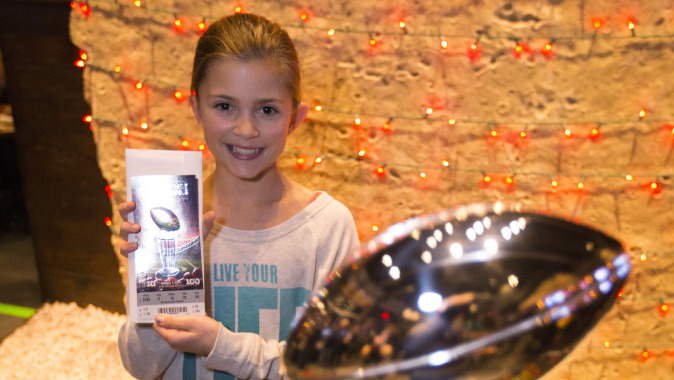 The most sought after award was one of four sets of Rose Bowl Game tickets; Geiman won the first set. While her mother was unsure if the family could swing a trip to California for the Granddaddy of Them All, the birthday girl had a confident answer.

“We are not staying home,” said Drew, who was visibly shaking 15 minutes after her winning number was announced. “I feel really lucky.”

The first winner of the evening was Jay Whannel of Fairfax, Iowa, who won an assortment of Rose Bowl items. Whannel attended a majority of Iowa’s games this season — including the Big Ten Championship Football Game in Indianapolis. He has also been to several Rose Bowls, but those were years ago.

“Now that I’m older I want to experience it again,” said Whannel, who already has game tickets. “I have an uncle who lives in Californian. We always spend Christmas out there and go to the game.”

While Whannel has passes into the big event, that was the reason Ann Raddant attended Sunday. The native of Milwaukee has lived in Iowa City since 2008 when she enrolled in graduate school at the University of Iowa.

“I’m not a (Wisconsin) Badgers fan, I promise,” Raddant said.

In fact, her favorite memory of the 2015 season was when the Hawkeyes forced and recovered a Wisconsin fumble on Iowa’s 1-yard line.

“It let me stick it to all my Badger friends,” she said. “The season was an absolute blast. It has been more and more exciting each week as they picked up the next win. You see the Big Ten is bringing it this year and Iowa is a huge part of that.”

UI Director of Athletics Gary Barta described the mood around the Hawkeye football program after coming 27 seconds from a berth in the College Football Playoffs.

“We were heartbroken on that last 22-play drive against Michigan State,” Barta said of the Spartans’ 16-13 win in the Big Ten championship. “Our hearts were torn, but the next day we got a phone call from (Scott Jenkins) and it started to heal the wounds immediately.”

Jenkins, who was in Coralville on Sunday, is chair of the Rose Bowl Management Committee. He knows the Rose Bowl Game is anything but a consolation prize and he is looking forward to seeing thousands of Hawkeye fans in Pasadena, California.

“To a large extent we feed off the enthusiasm of our guests,” Jenkins said. “We are so looking forward to the University of Iowa Hawkeyes coming and enjoying our New Year’s events.

“We are America’s New Year’s celebration. New York City starts it at midnight with the dropping of the big ball, but the rest of the day it’s from Pasadena.”

“This year there has been a fantastic demand,” Jenkins said. “Interesting enough, although Stanford was in our 2013 and 2014 game, their demand is quite high, too, but nothing like we have seen here in Iowa. It’s great to have a game people want to see.”

Jenkins encourages Hawkeye fans to attend the Tournament of Roses Parade, tailgate outside Rose Bowl Stadium, and watch the sun set behind the San Gabriel Mountains.

“If you can be there, you will have one of those Bucket List-kind-of-things,” Jenkins said. “If you can’t, I encourage you to watch on television with all your colleagues. I think the Hawkeyes are going to have a great time.”