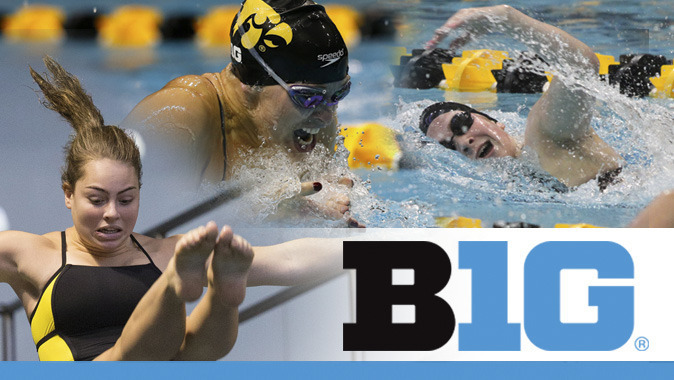 “I would like to congratulate these student-athletes,” said UI head coach Marc Long. “It is an outstanding and well-deserved recognition for their tremendous efforts last week against Iowa State.”

Rafferty earned her first career weekly diving honor after tallying a pair of top two finishes against the Cyclones. The West Des Moines, Iowa, native posted two NCAA Zone qualifying scores to win the 1-meter springboard (296.02) and finish as the runner-up on the 3-meter (309.98) springboard. Her 3-meter score was a career-best.

Rafferty is the first Hawkeye diver to earn the accolade since Abby Grilli on Jan. 21, 2014.

Schneider was tabbed as the Big Ten Freshman of the Week after swimming to a pair of distance freestyle victories at Iowa State. The Fishers, Indiana, native won the 500 and 1,000 freestyle events, posting career-bests in both races. Her 1,000 time of 10:03.34 is the fifth-fastest in UI history, while the 500 time of 4:53.32 ranks eighth.

Schneider is the first Iowa freshman to earn the distinction since Sougstad in 2013.

The Hawkeyes will travel to St. Petersburg, Florida, from Jan. 3-10, 2016, for a winter training trip. Iowa returns to action Jan. 16, hosting Illinois for a Big Ten Conference dual at the Campus Recreation and Wellness Center Natatorium.