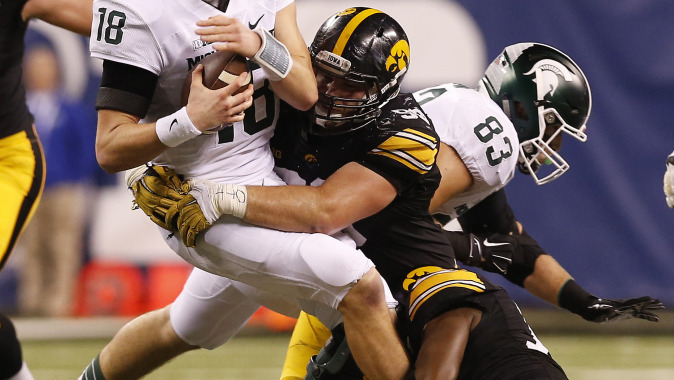 LOS ANGELES — Junior Nathan Bazata is embracing an opportunity to line up against the best when the fifth-ranked University of Iowa football team battles No. 6 Stanford in the 2016 Rose Bowl Game presented by Northwestern Mutual.

“It’s going to be a good challenge,” said Bazata, who has started all 13 games this season for a top 20-ranked Iowa defense. “He’s one of the best. I am going into the game working on my technique again.”

The Howells, Nebraska, native has prepared for the challenge by lining up against the true freshman Paulsen twins from Moville, Iowa, during bowl preparation to get him ready for Garnett and his 6-foot-5, 321 pound frame. Landan and Levi Paulsen are both listed at 6-5, 290.

“The Paulsen twins are big guys, and pushing someone like that in practice has helped me quite a bit,” said Bazata. “It has helped me make sure my technique is fine-tuned to be able to get underneath them and being able to use my leverage against them.”

Bazata has quietly done his job during his first season as a starting defensive tackle. His numbers are workman-like, tallying 39 tackles — including 15 solo stops — five tackles for loss, and three sacks.

“He gets the job done,” said defensive line coach Reese Morgan. “He’s not the biggest or fastest, but he’s extremely productive. He can go out and play blocks against a bigger player with great leverage and he’ll have a chance to make plays.”

Morgan loves Bazata’s toughness and his willingness to sacrifice for the betterment of the team.

“Nathan will do whatever you ask him to do and you know you’re going to get his best effort,” said Morgan. “He’ll give you everything he has on every play. That’s valuable because he takes a great deal of pride in what he’s doing.”

Bazata knows the importance of staying on blocks against a Stanford offense trying to find a way to get its star running back — and Heisman Trophy finalist Christian McCaffrey — into space.

“As an entire defensive line, it’s a big deal to stay on your blocks because it frees up Josey (Jewell), Cole (Fisher), and Ben (Niemann) to make all the plays,” he said. “If they have two guys on you, you’re doing your job. That’s what we are trying to do, just like against Michigan State.”

The 22-play drive that led to the game-winning Spartan touchdown in the Big Ten Championship Game has left a bitter taste in the mouths of Iowa defensive players since the Dec. 5 matchup in Indianapolis.

“It motivates us,” said Bazata. “We don’t ever want to lose a game like that. It felt like we were stuck out there. We have to do a better job of playing blocks, getting free, and making plays.”

In the Rose Bowl Game, it could be a deciding factor: Who can win at the line of scrimmage?

“It’s going to be important for Nathan to be detailed with his fundamentals, techniques, and leverage,” said Morgan. “He’s a prideful young man and has a strong competitive spirit.”

The 102nd Rose Bowl game will kick off at 4:10 p.m. (CT) from Rose Bowl Stadium in Pasadena, California. The game will be televised on ESPN.