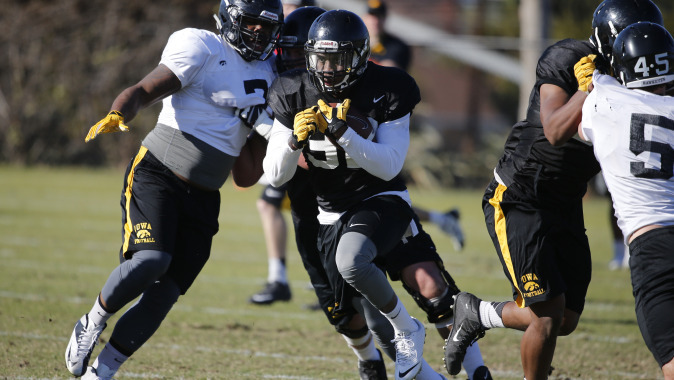 LOS ANGELES — Sophomore Derrick Mitchell, Jr., wanted to work his way on to the field for the University of Iowa football team in 2015. Entering the 102nd Rose Bowl Game presented by Northwestern Mutual, he has a defined role.

When No. 5 Iowa (12-1) squares off against sixth-ranked Stanford on Jan. 1, Mitchell, Jr., will be on the field as the Hawkeyes’ third-down specialist at the running back position.

The St. Louis native has done a little bit of everything in his first season in the offensive backfield. Mitchell, Jr., has carried the ball 24 times for 159 yards, averaging 6.6 yards per carry, and has 11 catches for 100 receiving yards.

Mitchell, Jr., likes the limelight of running and catching the football, but he’s just as enamored with doing the dirty work to help open things up for Iowa’s offense.

“I take pride in protecting C.J. (Beathard),” said Mitchell, Jr. “I know if I can protect C.J. there are a lot of big plays to be made. If I can give him time and help the line give him time, he can look downfield and throw the ball.”

“When he got in there, it wasn’t too big for him,” said White. “The thing I am most pleased with is his protection because you know he can catch the ball and run routes. He has a good awareness in terms of picking up blitzes, seeing things and going in and striking and cutting a guy.”

Mitchell, Jr.’s transition from wide receiver to running back went about as seamlessly as he could have hoped.

“It wasn’t a big adjustment because we used to do a 1-on-1 drill in practice with the receivers,” he said. “We went against the defensive backs and really got after it. It wasn’t hard for me to adjust, it was more so the technique of being able to pick up the linebackers.”

Mitchell, Jr.’s, blocking skills will be put to test against the Cardinal and a 3-4 defensive scheme that features a herd of linebackers, including first-team All-Pac 12 selection Blake Martinez and fifth-year senior Kevin Anderson.

“These guys are fast and aggressive,” said Mitchell, Jr. “I need to do my job to give C.J. time to keep our offense on the field.”

While Mitchell, Jr., has embraced the third-down role this season, he is aiming for bigger things in 2016. He has identified areas to address while watching Stanford’s Heisman finalist Christian McCaffrey.

“I see another great player and when I look at his game, I look at things I could do better,” he said. “He’s their guy and does a lot of things. (At Iowa) we pride ourselves to not have that one person be the guy, but to have a lot of guys do different things. I’m excited to work toward a bigger role.”

His role is defined come Friday when the Hawkeyes take the field in The Granddaddy of Them All. The 2016 Rose Bowl Game will kick off at 4:10 p.m. (CT) and the game will be televised on ESPN with Brent Musberger, Jesse Palmer, and Maria Taylor on the call.