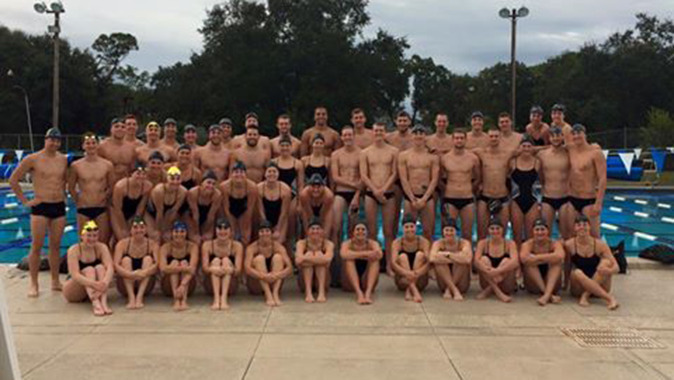 IOWA CITY, Iowa — For a seven-day stretch, it is eat, sleep, and swim for the University of Iowa swimming and diving team in Sarasota, Florida.

The Hawkeyes are in the midst of a week-long training trip, where they’re staying on the beach and training outdoors in the Arlington Park Pool.

UI head coach Marc Long says it is a 100-year tradition for northern schools to head south during the winter months. It’s a chance for teams to refocus and up the ante.

“Getting down here clears out any other distractions,” said Long, who led both the men’s and women’s teams to titles at the Hawkeye Invitational in December. “You can focus on training for performance and it’s a great environment. When you go to places like this, it’s the culture. There is an acquatics atmosphere, so that helps in bringing them together.”

With the championship portion of the schedule a little more than a month away, Long says it’s important for the team to use the trip as a springboard.

“When we get home there isn’t a whole lot of time before the February championships, so it’s important to maintain a focus,” said Long. “You want to hit the highs in training over this time period and it is an ideal setting for that.”

But it isn’t all work and no play.

“In between sessions, we have a lot of free time,” said Holliday. “We can walk to different restaurants down the street or go across the street and relax on the beach. There are also things we do in groups at night and we do different challenges to bring the team together.”

That’s the key, whether the Hawkeyes are training or on the beach, they’re together and they’re bonding.

“These trips are a chance to come together as a team,” said Long. “We’re with each other all the time — during meals, transportation, and at the hotels. It’s the close team-bonding atmosphere that is beneficial, in addition to the training.”

Holliday sees the work being put in the pool; he sees the Hawkeyes training with a purpose.

“We don’t have anything to think about, we just go out and practice,” he said. “That makes it easy to focus on what we’re here to do. It gets us into the right mindset to get us ready to race at the end of the year.”