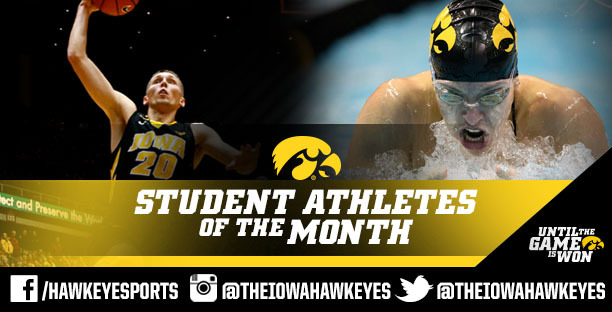 Uthoff, named a 2016 midseason All-American by ESPN and NBC, has helped the 16th-ranked Hawkeyes to a 12-3 overall record and a 3-0 record in conference play this season — Iowa’s best start in league play since the 2002-03 season. He has scored in double figures in all 15 games this season and ranks second nationally in blocked shots (3.3) and 54th in scoring (18.6) — best in the Big Ten.

During the month of December, the 6-foot-9 forward guided the Hawkeyes to a 6-1 record, while averaging 17.1 points, 6.6 rebounds, and 3.9 blocks per game. He was named Big Ten Co-Player of the Week on Dec. 14 for his performances against No. 2 Iowa State (32 points, 9 rebounds, 4 assists) and Drake (10 points, 3 rebounds, 5 blocks). The Cedar Rapids, Iowa, native also helped the Hawkeyes to an 83-70 victory over then No. 1 Michigan State on Dec. 29, tallying 10 points in addition to grabbing five boards and rejecting a career-high six blocks.

Uthoff and the Hawkeyes return to action Thursday when they travel to East Lansing, Michigan, for a rematch with fourth-ranked Michigan State. Tipoff is scheduled for 6:01 p.m. (CT) and the game will be broadcast live on ESPN.

Sougstad and the Hawkeyes are back in action on Dec. 16, hosting Illinois at 11 a.m. (CT) at the UI’s Campus Recreation and Wellness Center Natatorium.