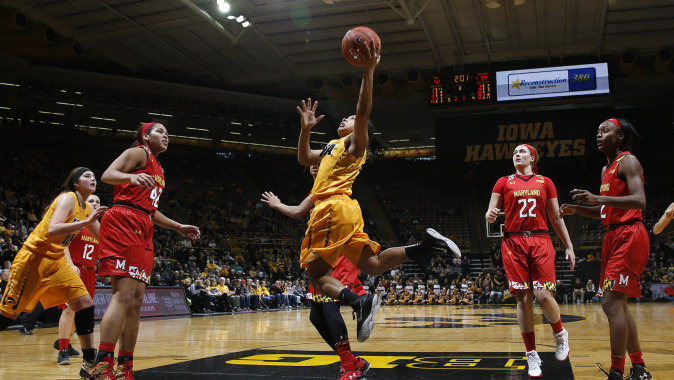 THE MATCHUP
The University of Iowa women’s basketball team remains on the road for a Big Ten Conference contest at Michigan State on Saturday, Jan. 16. Tipoff is set for 3:30 p.m. (CT) at the Breslin Center in East Lansing, Michigan.

GAME COVERAGE
? The Big Ten Network will air the Saturday afternoon game live. Lisa Byington (play-by-play) and Christy Winters-Scott (color) will call the game.
? Live audio of the game can be heard on select Hawkeye Radio Network affiliate stations and on Hawkeye All-Access available at hawkeyesports.com. Brent Balbinot and Stacy Schlapkohl will call the action.
? Balbinot is in his 12th year as Iowa’s play-by-play voice.
? Schlapkohl, who played in 104 games with 49 starts from 2004-08, helped Iowa to three NCAA Tournaments. She scored in double figures in 22 games.
? Links to video, audio, and Gametracker (live stats) are available on the women’s basketball schedule page at hawkeyesports.com.

NEAR PERFECTION
? Junior Ally Disterhoft flirted with perfection at Wisconsin on Wednesday.
? The 6-0 forward sunk 8-of-9 field goal attempts, was 1-for-1 from three-point range, and 1-for-1 at the free throw line to lead the Hawkeyes offensively with 18 points.
? She also pulled down five rebounds, two offensive and three defensive, dished out two assists, recorded two steals, and added a block in her 32 minutes.
? The Iowa City, Iowa, native has reached double figures in every game this season and in 62 of her 68 career starts.

COMING ON STRONG
? Sophomore point guard Whitney Jennings has hit her stride, improving significantly in conference play.
? In three of five league games, Jennings has scored in double figures (10 vs. Rutgers; 10 vs. Maryland; 11 at Wisconsin).
? The Logansport, Indiana, native is leading the team with 17 assists and owns a .378 field goal percentage and a .375 three-point field goal percentage in conference contests.
? She averages 9.0 points per game in conference games. In all 17 games, she averages 8.2 points per game and is shooting .319 from field goal range and .295 from beyond the arc.

SCOUTING THE SPARTANS
? Michigan State enters the game with a 12-4 record overall and a 3-2 mark in Big Ten play.
? The Spartans fell at Ohio State in their conference opener, 85-80, before winning the next three conference games against Wisconsin, 77-67, at Penn State, 71-55, and against Northwestern, 74-51. The team dropped its most recent game at Indiana, 81-65.
? As a team, Michigan State averages 77.2 points per game. Four average double figures in scoring, including Aerial Powers (18.5), Tori Jankoska (16.8), Branndais Agee (11.3), and Jasmine Hines (10.4). Powers is also the team’s leading rebounder, averaging 5.2 per game.
? In conference play alone, Powers averages a double-double with 20.0 points and 10.8 rebounds per game.
? Powers was a preseason All-Big Ten selection by the coaches and media, while Jankoska was selected preseason All-Big Ten by the media.
? The roster, comprised of five freshmen, five sophomores, two juniors and three seniors, is led by ninth-year head coach Suzy Merchant.

HAWKEYES HOLD OFF BADGERS
? The Hawkeyes held off of a fourth quarter surge to record a road win at Wisconsin Wednesday night, 57-54.
? Ally Disterhoft led the team in scoring with 18 points, hitting 8-of-9 field goals. Whitney Jennings joined her in double figures with 11 points.
? Christina Buttenham came off the bench to match her career-high and pace the Hawkeyes in rebounds with six, four offensive and two defensive.
? Iowa outrebounded the Badgers, 36-28.
? Depth made a difference for the Hawkeyes, as their bench outscored the Badger reserves, 12-2. MISS MICHIGAN RETURNS
Freshman Tania Davis, the Michigan Miss Basketball honoree in 2014-15, returns to her home state for Saturday’s matchup at Michigan State. The 5-4 guard averages 19.5 minutes, 6.1 points, 2.6 rebounds, and 2.2 assists per game. The Grand Blanc, Michigan, native has appeared in all 17 games this season for the Hawkeyes with two starts.

CONSISTENT FORCE
? Junior forward Ally Disterhoft has been a consistent offensive weapon for the Hawkeyes this season.
? She has scored in double figures in all 17 games this season and in 62 of her 68 career starts.
? The Iowa City, Iowa, native leads the team in scoring, averaging 16.8 points per game. She is shooting .552 from field goal range and .375 from three-point land.
? Disterhoft has led Iowa in scoring in nine of 17 games this season, scoring 20 points or more in three contests.
? She is currently 21st on Iowa’s all-time scoring list with 1,262 career points and 22nd all-time in rebounding with 523 career rebounds. Disterhoft is the 34th player in program history to surpass the 1,000 career point threshold.
? Disterhoft is second on the team in rebounds, averaging 5.6 rebounds per game, and in assists per game, averaging 3.0 per contest.

UP NEXT
The Hawkeyes return to Carver-Hawkeye Arena to host Penn State on Wednesday, Jan. 20 at 7 p.m. Fans can watch the game live online on BTN Plus available at btn2go.com.