Looking for a Fast Start 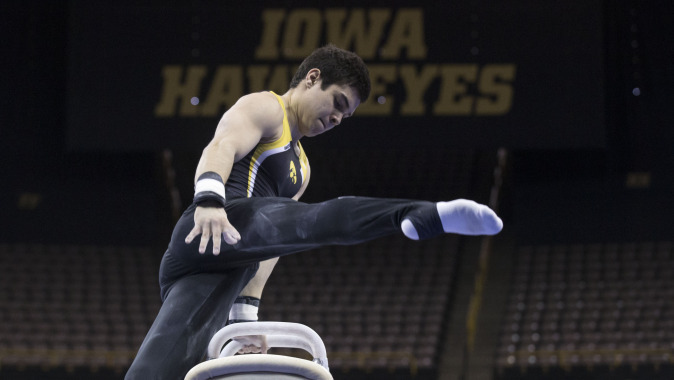 IOWA CITY, Iowa — The University of Iowa men’s gymnastics team heads to Chicago this weekend to kick off the regular season at the 46th Windy City Invitational, but the Hawkeyes face an early challenge.

Big Ten rivals Illinois, Michigan, Minnesota, and Ohio State, all of whom finished ahead of the Hawkeyes at last year’s Big Ten Championships, will compete at the meet. Iowa will be looking to show what it has early in the season.

“You have not just the Big Ten, but the top ranked teams in the country,” said UI head coach JD Reive. “It’s good to see them competing and where they are in person rather than on video and paper. Seeing our identity for the season and what kind of gymnastics everybody has is a real indicator of where we are as a team.”

This meet is the first taste of collegiate competition for the four freshmen on the roster. Reive will be keeping an eye on the quartet, a group that surprised him in December with solid performances at the Black and Gold Intrasquad meet.

Freshman Jake Brodarzon has been working toward this moment for years and is excited to finally be competing on the collegiate stage.

“I’m nervous to get back out, but I’m excited because I love competition season,” Brodarzon said. “Competing in college is what I’ve wanted to do my whole life. It’s crazy to think it’s actually here.”

It’s not just the underclassmen who feel the nerves, senior Del Vecchio Orozco will be competing in the Windy City Invitational for the fourth time, but still feels jittery.

“I am always a little nervous at the start of the season,” he said. “I like being nervous for these meets because it shows that we are passionate for what we do and we care about how we do it. Nerves are at an all-time high.”

Each team will have rust with a competition this early in the season. Orozco believes each team will be in similar positions.

“I am sure (the other teams) are in our position as well. The teams that can stay on and hit the most sets will take the gold,” Orozco said. “At this point in the season it’s about who can stay on the events and whose routine is cleanest.”

While the challenge for the gymnasts is performing a clean routine, the coaches are still working to finalize a lineup. With so much depth on the roster, Reive will have to choose wisely.

“We can only travel with 15 guys, so I have to leave three guys behind, but all the guys on our team can do a routine and compete for us,” Reive said. “It has been difficult, but it is a great problem to have because the freshmen want in.”

The competition begins Sunday at 3 p.m. (CT) inside the UIC Pavilion.