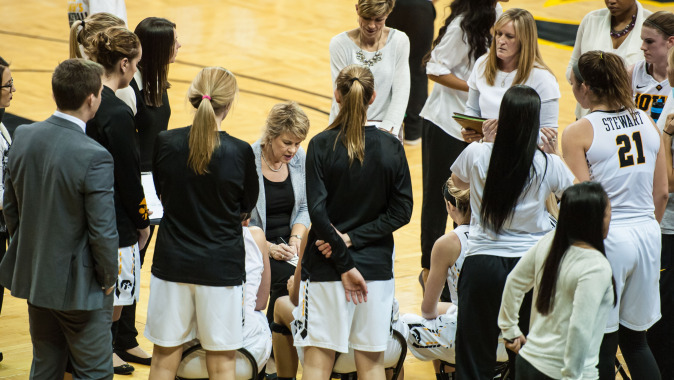 THE SETTING
The University of Iowa women’s basketball team will face Indiana on Thursday, Feb. 4 in Bloomington, Indiana. The 6 p.m. (CT) contest will be shown live on the Big Ten Network.

GAME COVERAGE
? Thursday’s game will air live on the Big Ten Network with Kevin Lee (play-by-play) and Katie Smith (color) on the call.
? Live audio of the game can be heard on select Hawkeye Radio Network affiliate stations and on Hawkeye All-Access available at hawkeyesports.com. Brent Balbinot and Todd Werner will call the action.
? Balbinot is in his 12th season as Iowa’s play-by-play voice, while Todd Werner is in his first providing analysis.
? Links to video, audio, and live stats are available on the women’s basketball schedule page at hawkeyesports.com.

SERIES HISTORY
? Iowa leads Indiana, 47-16, in the all-time series.
? The Hawkeyes have won two consecutive games against the Hoosiers, and nine of the last 10 in the series.
? In games played in Bloomington, Indiana, Iowa leads the series, 17-11.
? Under head coach Lisa Bluder, Iowa owns a 20-6 record against Indiana.
? Iowa is ranked No. 42 in the most recent RPI release and has played the 39th most difficult schedule in the country. Indiana is 50th in the RPI with the 27th most difficult schedule.

A LOOK AT THE HOOSIERS
? Indiana is 13-9 overall and 5-5 in Big Ten play heading in to Thursday’s game.
? The Hoosiers are the only team in the conference that remains undefeated at home, 9-0.
? As a team, Indiana averages 70.5 points and 36.8 rebounds per game. Tyra Buss (18.5), Amanda Cahill (14.2), and Alexis Gassion (10.5) average double figures in scoring.
? Indiana’s five wins came against Michigan in overtime, 77-69, Michigan State, 81-65, Illinois, 68-66, at Northwestern, 91-84, and Rutgers, 64-48. Four of five conference wins came in Bloomington, Indiana.
? The roster, comprised of three freshmen, four sophomores, four juniors, and one senior, is led by second-year head coach Teri Moren.

HOT START TO `NEW’ SEASON
? Following the team’s loss to Penn State, the coaches put on a second media day inside the film room with the Hawkeye players and staff. Head coach Lisa Bluder addressed the team in a press conference style, and each student-athlete was asked to come up to the podium. The exercise was designed to get the team to finish strong in the final 10 games of the season.
? Iowa is 2-0 since beginning its `new’ season with victories over Michigan, 85-69, and at Northwestern, 79-64. The Wildcats were ranked as high as No. 12 this season.
? The Hawkeyes have a scoring average of 82.0 points per game and own a +15.5 scoring margin. The squad is also averaging 40.5 rebounds per game with a +2.5 rebounding margin. In all 22 games, Iowa averages 73.8 points (+4.6 margin) and 39.2 rebounds (+1.7 margin) per game.
? In the two game stretch, four Hawkeyes average double figures in scoring. Chase Coley (20.0) leads the way, followed by Ally Disterhoft (17.0), Tania Davis (14.5), and Megan Gustafson (12.5). Whitney Jennings is just shy of double figures with 9.5 points per game.
? In the last two games, Iowa posted 37 assists for an 18.5 assists per game average. On the season, the Hawkeyes average 15.6 assists per game. Turnovers are also down, as Iowa averaged 13 per game in the two game stretch compared to 16.1 turnovers per game on the season.

COLEY EARNS B1G RECOGNITION
? Sophomore Chase Coley was named to the Big Ten Player of the Week Honor Roll for the first time in her career on Feb. 1 for her role in Iowa’s victories against Michigan and at Northwestern last week.
? Coley led the Hawkeyes offensively in each contest, posting 21 points against the Wolverines and 19 points against the Wildcats. She added 10 rebounds to her line against Michigan to earn her third career double-double.
? On the week, Coley shot .789 (15-of-19) from the field and .833 (10-of-12) from the charity stripe.
? The Minneapolis, Minnesota, native also tallied five assists and three blocks in the two-game stretch.

DOUBLE DOUBLE-DOUBLE
? Freshman Megan Gustafson made a statement last week, posting the first double-doubles of her career in back-to-back games.
? Gustafson opened the week with 10 points and a career-high 12 rebounds against Michigan in 22 minutes.
? The Port Wing, Wisconsin, native followed that performance with 15 points and a career-high 13 rebounds in 33 minutes.
? Gustafson, who has started the last three games for the Hawkeyes, also notched three blocks and one steal in each contest.

HAWKEYES SOAR PAST WILDCATS
? Iowa earned a road win at Northwestern, 79-64, on Jan. 31. The Wildcats were ranked as high as No. 12 this season.
? Five Hawkeyes scored in double figures, including sophomore Chase Coley (19), junior Ally Disterhoft (18), freshman Megan Gustafson (15), sophomore Whitney Jennings (11) and freshman Tania Davis (11). It is the third game of the season in which five Hawkeyes reached double figures in scoring.
? Gustafson recorded her second consecutive double-double with 15 points and a career high 13 rebounds. It is the second double-double of her career.
? Davis has scored in double figures in three consecutive games.
? Disterhoft has scored in double figures every game this season and in 67 of 73 career starts. She is 16th in career points at Iowa with 1,343 points and 21st in career rebounds with 551 rebounds.
? Junior Alexa Kastanek came off the bench to lead the Hawkeyes in assists with six, pull down four rebounds, and net three points in 21 minutes.

MOVING UP THE CHARTS
? Junior Ally Disterhoft is 16th on Iowa’s all-time scoring list with 1,343 career points and 21st all-time with 551 career rebounds.
? She has played in every game of her Hawkeye career with 73 consecutive starts.
? Disterhoft has scored in double figures in every game this season, and in 67 of her 73 career starts.
? The co-captain leads Iowa in points (16.6) and rebounds per game (5.5).
? Freshman Megan Gustafson has compiled 37 blocks through 22 games played this season, which is fourth on the all-time freshman list at Iowa. The record at Iowa in a freshman season is 79 blocks, set by Morgan Johnson in 2009-10. She averages a team leading 1.7 blocks per game and has tallied three or more stuffs in seven games this year.

CALL ON ME
? Junior Ally Disterhoft, a preseason All-Big Ten selection by league coaches, has been a consistent force for the Hawkeyes all season.
? Disterhoft, who averages 35.9 minutes per contest, is 11th nationally with 789 minutes played this season.
? The 6-0 forward paces Iowa in points (16.6) and rebounds (5.5) per game, along with sophomore Chase Coley. She is also third in assists, averaging 2.8 per contest, and steals, averaging 1.0 per game.
? She has scored double figures in every game of the season and in 67 of 73 career starts.
? The Iowa City, Iowa, native has led Iowa in scoring in 10 of 21 games this season, scoring 20 points or more in five contests.
? Disterhoft owns a .521 field goal percentage, .364 three-point field goal percentage, and .736 free throw percentage.
? She currently ranks 16th on Iowa’s all-time scoring list with 1,343 career points and 21st all-time with 551 career rebounds. Disterhoft is the 34th player in program history to surpass the 1,000 career point threshold.

BACK ON TRACK VS. MICHIGAN
? The Hawkeyes topped Michigan, 85-69, on their home court on Jan. 28 to end a three-game losing streak and get back on the winning track.
? Iowa’s 85 points is a team high in Big Ten play. The last time the Hawkeyes scored over 80 points was on Dec. 22 against Drake (89 points).
? Freshman Megan Gustafson recorded her first career double-double with 10 points and 12 rebounds, while sophomore Chase Coley posted the third of her career with 21 points and 10 rebounds.
? Freshman Tania Davis set a career high in points with 18, and added five assists and her first career block to her line.
? Junior Ally Disterhoft also reached double figures with 16 points. She has scored in double figures every game this season and in 67 of 73 career starts.
? The squad posted 21 assists to 12 turnovers.
? The Hawkeyes matched a season best with seven blocks in the contest.
? The Iowa bench outscored Michigan reserves, 33-6.

UP NEXT
The Hawkeyes host No. 14/17 Michigan State on Sunday, Feb. 7 inside Carver-Hawkeye Arena. Tipoff is set for 2 p.m. (CT) and the game will be on BTN Plus. Iowa will celebrate National Girls and Women in Sports Day at the contest.