IOWA CITY, Iowa — Head coach Kirk Ferentz and the University of Iowa football coaching staff zeroed in on growth potential and versatility and it paid off Wednesday with an abundant 24-member recruiting class.

The defensive side of the ball was an area of importance for the Hawkeyes, who signed five defensive linemen, five linebackers, and four defensive backs. 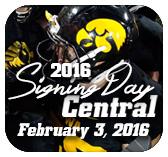 “It is fair to say defense was a big emphasis for us this year,” Ferentz said Wednesday at a signing day news conference in the Stew and LeNore Hansen Football Performance Center.

Iowa is coming off a 12-0 regular season that saw the Hawkeyes win the West Division Championship and receive a bid to the Rose Bowl Game. Ferentz said that momentum will probably pay more dividends with future recruiting classes.

“In my mind we’re building momentum,” Ferentz said. “It’s been our goal from day one, and now we still have some other things that we have to accomplish and we’re working on. But I think it’s going to help us as we move down the road and feel good about the 2017 class, feel good about the way that started out, and I think last season impacted that more so.”

The Hawkeyes signed five student-athletes from the states of Iowa and Illinois, four from Michigan, and three from Wisconsin. Ferentz said the emergence of 2015 Jim Thorpe Award winner Desmond King had a lot to do with the gains made in Detroit, especially with defensive ends Chauncey Golston and Cedrick Lattimore from East English Village. King finished his playing career at East English Village in 2012.

“Desmond has done a great job representing the program,” Ferentz said. “He has grown as a young man and he is really respected in that school. It was very clear that everybody there is excited about what he has done in our program. He has represented East English well.”

Another student-athlete signing from Detroit is offensive lineman Alaric Jackson. The 6-foot-7, 285-pound Jackson received strong overtures from another Big Ten Conference school in the past few days, but in the end he decided Iowa City was the best place for him.

“We felt really good after his visit that he had strong feelings about us, and I don’t think that ever wavered,” Ferentz said. “I’m not going to say I wasn’t concerned about it, because anything can happen in recruiting. But his consistency throughout the process impressed me a great deal and makes you feel better about him as a football player, too. I talked about things that we’re looking for and guys that can handle the process and get guidance.”

Ferentz is comfortable with the student-athletes the Hawkeyes signed, calling them “team-first” players.

As is typically the case, Iowa wrapped up its 2016 class without a lot of drama.

“If I have to stand on my head to get a guy or tell a funny story, we’re in big trouble,” Ferentz said. “Ask any of our players on the team right now. We’re just going to try to stick to the basics, so what we have here educationally, football-wise, and most importantly, the community, and that part is really consistent.

“That’s what hit me in 1981 when I got here for my interview. I was just amazed at the people. However many years it is later now, everybody comes from other parts of the country, even out of state, when they come to Iowa City, it’s a unique experience.”

On offense, the Hawkeyes inked three linemen, three tight ends, two running backs, a wide receiver, and a quarterback. The first commitment in the class was Nathan Stanley, a quarterback from Menomonie, Wisconsin, with ties to the state of Iowa. His parents attended Wartburg College in Waverly, Iowa.

“We really think he’s got all the attributes of a good quarterback,” Ferentz said. “He’s a good athlete who has a real command and presence about him in a quiet way — kind of like C.J. Beathard or Brad Banks — not necessarily a boisterous guy, but a guy that players rally around and gravitate to.

“I think he’s got all the physical attributes that you would look for and on top of that, all the characteristics you like to see a guy embody. I’ll throw in there, too, he might have the biggest hands of any player I’ve ever shook hands with.”

In housekeeping news, the Hawkeyes will begin spring practice the last week in March with the annual open practice scheduled for Saturday, April 23, in side Kinnick Stadium. Iowa will once again hold an open practice in Des Moines the weekend of April 8-10.