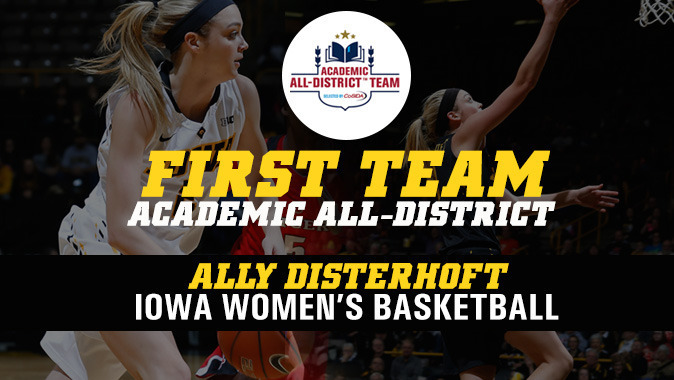 IOWA CITY, Iowa — University of Iowa junior Ally Disterhoft earned Capital One Academic All-District first team recognition for the second consecutive season for her efforts on the court and in the classroom Thursday. She will advance to the Capital One Academic All-America Team ballot, where first-, second-, and third-team All-America honorees will be elected later this month.

Disterhoft, the lone sophomore in the country to earn Capital One Academic All-America third team accolades in 2015, is a business major studying accounting and finance.

The Iowa City, Iowa, native as played in all 94 games of her Hawkeye career with 75 consecutive starts. Disterhoft has scored double figures in every game this season and in 69 of her 75 career starts. She leads Iowa in points (16.8) and rebounds (5.6) per game, and is third in assists (2.7) and steals (1.0) per contest. The 6-0 guard/forward has led the Hawkeyes in scoring in 11 of 24 games this year, netting 20 points or more in six contests.

Disterhoft, who has already posted new career-highs in points (26), steals (4), and blocks (3) in a game this season, owns a .521 field goal percentage, a team-high .366 three-point field goal percentage, and a .736 free throw percentage. She ranks 14th in three-point field goals made in her career (99), 15th in scoring (1,380 career points), and 20th in rebounding (563 career rebounds) at Iowa. Disterhoft, a preseason All-Big Ten selection, became the 34th player in program history to surpass the 1,000 career point threshold on Nov. 15 against UT Martin.

Disterhoft was named to the Big Ten Player of the Week Honor Roll on Dec. 7 and again on Dec. 28 for her efforts on the court. The team-elected captain is also a WBCA Allstate Good Works Team honoree for her efforts in raising helmet awareness on mopeds locally.

In the classroom, Disterhoft is a four-time Dean’s List honoree, academic All-Big Ten selection, Big Ten Distinguished Scholar, and two-time Presidential Committee on Athletics Scholar-Athlete. She was also recognized as female Student-Athlete of the Month in November — an award voted on by UI student-athletes.

As a sophomore, Disterhoft started all 34 games for the Hawkeyes and tied for first on the team and 13th in the Big Ten in scoring (14.8). She helped the program to its sixth Sweet 16 appearance in program history, and its first since 1996. Disterhoft was elected a second team All-Big Ten honoree.

Disterhoft earned honorable mention All-Big Ten, Big Ten All-Freshman Team, and Big Ten All-Tournament Team accolades as a freshman. She was second on the team in rebounding, averaging 6.4 rebounds per game, and third in scoring, averaging 13.2 points per game.

The Hawkeyes are back in action against 6th-ranked Ohio State tonight at 7:30 p.m. (CT) inside Carver-Hawkeye Arena. The game will air live on the Big Ten Network.