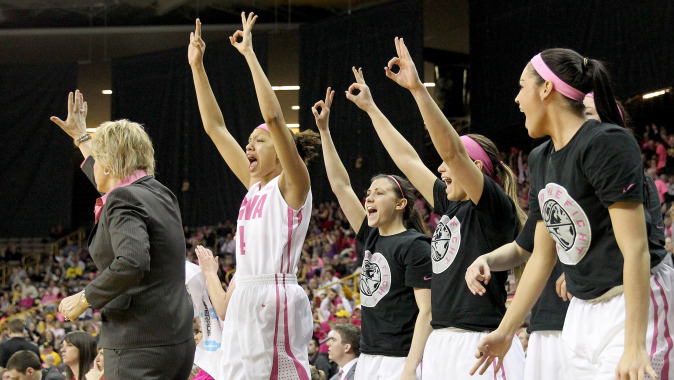 PROMOTIONS
? Sunday is the annual Pink Game inside Carver-Hawkeye Arena. Fans who wear pink will receive $2 off the regular price of admission.
? The first 1,000 fans will receive a pink Iowa women’s basketball t-shirt and pink pom-poms.
? The game is also Girl Scout Day, Linn County Day, and Kids Zone will be available prior to tipoff.

GAME COVERAGE
? Fans can watch the game live online on BTN Plus available at btn2go.com.
? Audio of the contest is available on select Hawkeye Radio Network affiliate stations and on Hawkeye All-Access available at hawkeyesports.com. Brent Balbinot and Stacy Schlapkohl will call the action.
? Balbinot is in his 12th year as Iowa’s play-by-play voice, while Schlapkohl is in her first providing analysis.
? Schlapkohl, who played in 104 games with 49 starts from 2004-08, helped Iowa to three NCAA Tournaments. She scored in double figures in 22 games.
? Links to video, audio, and Gametracker (live stats) are available on the women’s basketball schedule page at hawkeyesports.com.

HAWKEYE FRESHMEN REPORT
? Freshman Megan Gustafson leads all Big Ten freshmen in blocks with 46 followed by Illinois’ Alex Wittinger who has recorded 42 on the season. Gustafson is one of two freshmen to lead her team in blocks (46) this year (Hallie Thome, Michigan — 33 blocks).
? Gustafson is second among league freshmen in rebounding (171), second in blocks per game (1.7), third in rebounds per game (6.3), fourth in scoring (257 points), and fifth in points per game (9.5). She is one of two freshmen in the conference who lead their team in rebounds (Jessica Shepard, Nebraska — 230 rebounds).
? Gustafson has blocked three or more shots in eight of her 27 career games.
? Freshman Tania Davis is one of two Big Ten freshmen who lead their team in the assists category. She has distributed 86 this season, bested only by Penn State’s Teniya Page (104).
? Davis is second among Big Ten freshmen in steals (26) behind Page (35), fourth in minutes per game (24.4), sixth in scoring (217) and points per game (8.0).
? Davis has dished out five or more assists in seven of her 27 games played.

HAWKEYES GET PAYBACK WIN
? Iowa defeated Purdue, 63-55, Thursday in Carver-Hawkeye Arena to end a four-game skid and even the series, 1-1, against the Boilermakers this season. The Hawkeyes have won four-straight home games against Purdue.
? It is Iowa’s first win without netting a three-point field goal in 18 years. The last time the Hawkeyes won a game without sinking a three was on Feb. 28, 1998 when Iowa defeated Ohio State in the opening round of the Big Ten Tournament, 72-54. Iowa was 0-for-2 in three-point field goal attempts.
? The Hawkeyes shot 48.6 percent and outscored Purdue, 36-22, in the paint to secure the win.
? Four Hawkeyes scored in double figures, including freshman Megan Gustafson (18), sophomore Chase Coley (14), freshman Tania Davis (12) and junior Ally Disterhoft (12).
? Coley and Gustafson combined to score 32 points, accounting for 50.7 percent of Iowa’s offense production.
? The Hawkeye defense held the Boilermakers scoreless for the final 4:33 of the contest.

SEASON REWIND
? The Hawkeyes dropped a 79-74 decision at Indiana on Feb. 4.
? Iowa led by as much as 17 points, but was outscored by the Hoosiers 24-20 in the third quarter and 32-16 in the fourth quarter to take the loss.
? Amanda Cahill (24), Jenn Anderson (18), and Tyra Buss (18) scored in double figures for Indiana. Buss added 10 rebounds for a double-double, while Alexis Gassion recorded a team-high 11 boards.
? Whitney Jennings led Iowa in scoring with a career-high 22 points, followed by Ally Disterhoft (20), and Megan Gustafson (12). Gustafson pulled down a team-high 10 rebounds for a double-double.

BIG DIFFERENCE
? Since altering the lineup to include freshman Megan Gustafson and sophomore Chase Coley, the Hawkeyes have seen an increase in production offensively.
? In the last eight games, Iowa has had five players average double figures in scoring rather than three in the previous 19 games. Leading the pack is junior Ally Disterhoft (18.0), followed by Coley (14.4), Gustafson (12.0), freshman Tania Davis (11.1), and sophomore Whitney Jennings (10.8).
? The team has also increased its points per game average from 73.0 to 75.0.
? Gustafson, who has led Iowa in rebounds in seven consecutive games, has seen her rebounds per game average spike from 4.8 to 10.0 in the last eight games, while Coley has made the jump from 5.0 to 7.5.
? The 6-3 duo accounts for 48 percent of the team’s rebounding effort and 35 percent of Iowa’s offensive production.

MOVING UP THE CHARTS
? Junior Ally Disterhoft is 14th all-time in three-point field goals made (101), 15th all-time in scoring (1,432 career points), and 18th all-time in rebounding (579 career rebounds) in Iowa women’s basketball history.
? Disterhoft, who has played in every game of her Hawkeye career with 78 consecutive starts, has scored double figures in every game this year and in 72 of her 78 career starts. She is 14th-highest scoring junior in program history with 455 points this season. The record for points in a junior season is 564 (Michelle Edwards, 1986-87).
? Megan Gustafson has compiled 46 blocks through 27 games played this season, which is fourth on the all-time freshman list at Iowa. The program record of 79 stuffs was set by Morgan Johnson in 2009-10. Gustafson averages a team-leading 1.7 blocks per contest and has compiled three or more stuffs in eight games this season.
? Gustafson owns the seventh-highest rebound total of all freshmen in program history with 171 boards. The record for most rebounds in a freshman season is 252 (Krista VandeVenter, 2004-05)
? Alexa Kastanek has netted 51 three-point field goals so far in her junior campaign, which ranks her seventh in her class in program history. The record for three-pointers made in a junior season is 97 (Melissa Dixon, 2013-14).
? Tania Davis is the sixth-highest rated freshman passer in program history with 86 assists. The record for assists in a freshman season is 136 (Samantha Logic, 2011-12).

DOUBLE-DOUBLE MACHINE
? In the last seven games, freshman Megan Gustafson has posted five double-doubles, the first of her career.
? The stretch began with three consecutive double-doubles against Michigan (12 rebounds, 10 points) on Jan. 28, at Northwestern (15 points, 13 rebounds) on Jan. 31, and at Indiana (12 points, 10 rebounds).
? After recording eight rebounds and seven points against Michigan State on Feb. 7, Gustafson returned to her double-double ways with 13 points and 11 rebounds against Ohio State on Feb. 11.
? The Port Wing, Wisconsin, native secured her fifth double-double at Minnesota on Feb. 15, tallying 14 points and a career-high 19 boards. The last player to record more than 17 rebounds in a game was Samantha Logic (vs. Drake on Dec. 21, 2013). The Iowa record for rebounds in a game is 26 (Jerica Watson vs. Creighton on Dec. 15, 2001).
? The 6-3 center most recently netted a team-high 18 points and a team-high seven rebounds, along with sophomore Chase Coley, against Purdue on Feb. 18.
? Gustafson has led Iowa in rebounds in seven-straight contests, after not registering a single rebound against Purdue on Jan. 24.

UP NEXT
The Hawkeyes play their final road game of the regular season at Penn State on Wednesday, Feb. 24 at 6 p.m. (CT).