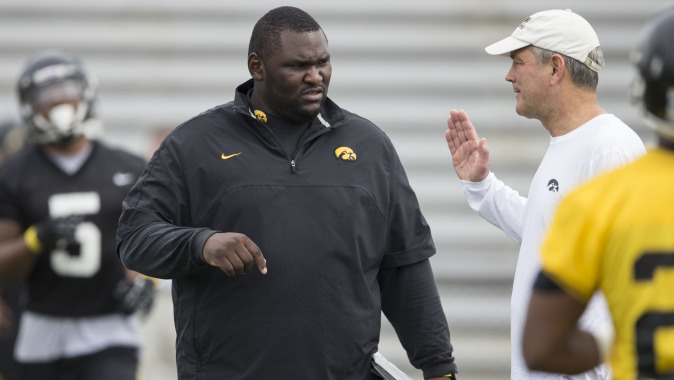 IOWA CITY, Iowa — Kelvin Bell, who has served as director of on-campus recruiting for the University of Iowa football program the past two years, has been named recruiting coordinator and defensive assistant coach on the Iowa football staff. The announcement was made Friday by UI head football coach Kirk Ferentz. Bell fills the vacancy created when Seth Wallace was named Iowa’s linebacker coach in January.

“Kelvin will be a very positive addition to our coaching staff,” said Ferentz. “As a former player and an Iowa graduate, he possesses an extensive understanding of our Hawkeye football culture, which is built on character, academics and player development.”

In his previous position, Bell assisted with all aspects of prospect identification, while assisting the coaching staff in off-campus recruiting efforts and coordinating all aspects regarding on-campus recruiting activities. Bell previously served as a graduate assistant coach with the Hawkeyes for two years (2012-13), assisting with special teams.

“In 2012, Coach Ferentz gave me a chance to return to Iowa football as a graduate assistant,” said Bell. “I was thrilled to be able to work for one of the best men in this profession and contribute to the success of my alma mater. My experiences these past four years, both on and off the field, have been invaluable toward my development in the coaching profession. I’m thankful for the opportunity to continue my career as a member of the Iowa football coaching staff.”

Bell joined the Iowa staff after serving as an assistant coach at Trinity International University, where he served as the offensive line coach and run game coordinator in 2011. Two of his offensive linemen earned all-conference honors in 2011.

Bell served two seasons (2008-09) as offensive line coach at Wayne State College in Wayne, Nebraska. He helped lead the Wildcats to their first-ever appearance in the NCAA Division II playoffs in 2008 while posting a two-year record of 17-6. Bell coached five offensive linemen who went on to earn all-conference, all-region and All-America honors.

Before coaching at WSC, Bell coached the offensive line at Cornell College for two seasons (2006-2007). He gained his first coaching experience at Regina High School in Iowa City (2004-06), where he served as junior high coach, varsity weight room supervisor, and assistant varsity coach. Regina earned its first-ever state football championship in 2005 after reaching the semifinals in 2004.

Bell first joined the Iowa program as a defensive lineman in 2000. He redshirted in his first year at Iowa and later had his career cut short due to injury. As a prep, he earned first team all-conference honors for three straight seasons as an offensive and defensive lineman. He earned all-district, all-region and all-county recognition as a senior.

Bell earned his B.A. in mathematics, with a computer science concentration, from the University of Iowa in 2005. He earned his master’s degree in sports management in 2014.

Bell is a native of Olive Branch, Mississippi. His wife’s name is Natalee.