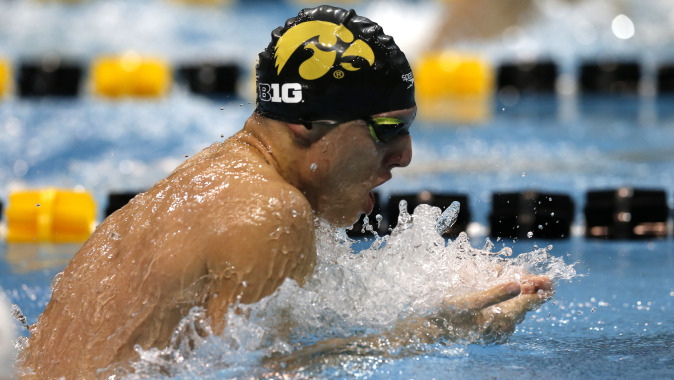 Trussov earned the All-Big Ten recognition courtesy of his runner-up finish in the 100 breast on Friday. On Saturday, the Kazakhstan native swam to a 10th-place finish in the 200 breast in 1:57.05. Senior Mike Nelson also finaled in the event, placing 24th in 2:01.12.

Freshman Kenneth Mende opened the day’s prelims with the fourth-fastest time in program history in the 200-back (1:43.87) to qualify for the finals. He finished with a time of 1:44.65 during his second swim to place 12th overall.

In the diving well a pair of seniors qualified for finals in platform competition. Senior Addison Boschult advanced to the “A” final and finished sixth overall with a score of 350.45. Senior Andrew Hull was a “B” finalist, placing 14th with a score of 320.25.

Iowa made it to the podium in the 400-free relay with an eighth-place finish. Freshman Matt Kamin, freshman Jack Smith, Trussov, and senior Charles Holliday swam to a time of 2:56.46.

Sophomore Jerzy Twarowski finished ninth in the 200-fly. The sophomore swam to a finishing time of 1:46.31, while sophomore RJ Hemmingsen was 23rd with a time of 1:50.98.

Iowa finished in seventh place in the team standings with 551 points. Michigan won its sixth straight team title with 1,475.5 points and Indiana was the team runner-up with 1,306 points.

The Hawkeye divers will be in action at the 2016 NCAA Zone D Diving Championships from March 7-9 in College Station, Texas.