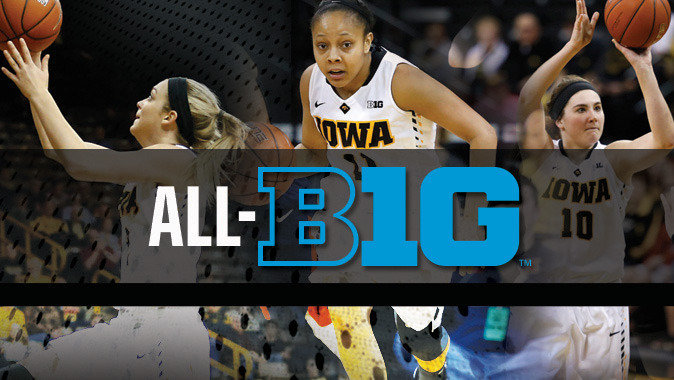 It is the fifth time in 15 years that a conference team has had two players named to the Big Ten All-Freshman Team, and the first time since 2008 when Ohio State accomplished the feat (Kalisha Keane, Brittney Thomas).

Disterhoft, a preseason All-Big Ten selection by league coaches, has scored in double figures in every game this season and in 75 of her 81 consecutive starts. She has led the Hawkeyes in scoring in 14 of 30 games, netting 20 points or more in nine contests. The Iowa City, Iowa, native owns a .530 field goal percentage, .359 three-point field goal percentage, and .717 free throw percentage. Disterhoft has logged 1,089 minutes this season, which is fifth in the conference and ninth nationally.

Disterhoft ranks 14th in scoring in the Big Ten and leads the Hawkeyes with a 16.9 points per game average. She is also third on the team in rebounding (5.5), assists (2.6), steals (0.9), and blocks (0.8) per contest. Disterhoft has climbed career ranks at Iowa throughout the season. The co-captain is 11th all-time with 1,485 career points, 14th with 106 career three-pointers made, and 18th with 594 career rebounds. Disterhoft is the eighth-highest scoring junior in program history with 508 points this season.

The 6-0 guard/forward, who has been named to the Big Ten Player of the Week Honor Roll twice this year, is also a first team Academic All-District honoree and Allstate Good Works Team nominee. She was also named Iowa’s Student-Athlete of the Month in November.

Davis is one of two Big Ten freshmen to lead her team in assists per game (3.3) and average at least one steal per game this season (1.0). She has dished out 98 assists through 30 games played, the third-highest total recorded by a freshman at Iowa. Samantha Logic holds the record for assists in a freshman season at Iowa with 136, followed by Jaime Printy who dished out 99 in her debut season.

The Grand Blanc, Michigan, native has paced the Hawkeyes in assists in nine of 30 games, dishing out five or more in eight contests. Davis posted a career-high seven assists at Purdue on Jan. 24. On the season, Davis averages 8.1 points, 3.3 assists, 2.9 rebounds, and 1.0 steals per game. She owns a .408 field goal percentage, .240 three-point field goal percentage, and .776 free throw percentage.

Davis netted a career-high 18 points against Michigan on Jan. 28, pulled down a career-high six rebounds on four occasions, and played a career-high 38 minutes against Indiana on Feb. 21. The 5-4 point guard, who has been charged with the most difficult defensive assignments in Big Ten play, has played in all 30 games with 13 starts.

Gustafson is the only freshman to lead her team in field goal percentage (.537), rebounds (198), and blocks (52) this season. She has recorded seven double-doubles in the last 10 conference games played, and earned Big Ten Freshman of the Week honors for the first time on Feb. 22. Gustafson is the first Hawkeye to be named Big Ten Freshman of the Week since Feb. 28, 2012 (Logic).

The Port Wing, Wisconsin, native has blocked 52 shots, the third-highest total recorded by a freshman in Iowa history. Morgan Johnson holds the record for blocks in a freshman season at Iowa with 79, followed by Tangela Smith who tallied 73. Gustafson has posted three or more stuffs in nine games, including a career-high five blocks at Virginia on Dec. 2. She scored a career-high 23 points in overtime against Western Illinois on Nov. 19 and tallied a career-high 19 rebounds at Minnesota on Feb. 15. Her 19 boards are the highest recorded in a single game in Iowa women’s basketball history since Feb. 16, 2012 (Logic, 18 rebounds, at Michigan).

The 6-3 center has paced the Hawkeyes on the glass in 14 games, including nine of the last 11 this season. Gustafson, who has played in all 30 games with 11 starts, has led the team offensively four times.

The Hawkeyes begin 2016 Big Ten Tournament play on Thursday at 11 a.m. (CT) against Michigan at Bankers Life Fieldhouse in Indianapolis. With a win, Iowa will advance to play top-seeded Maryland on Friday at 11 a.m. The Big Ten Network will carry all tournament games, except for the championship, which will air on ESPN. For more information, visit bigten.org.