Hawkeyes to Compete in 2016 Postseason WNIT 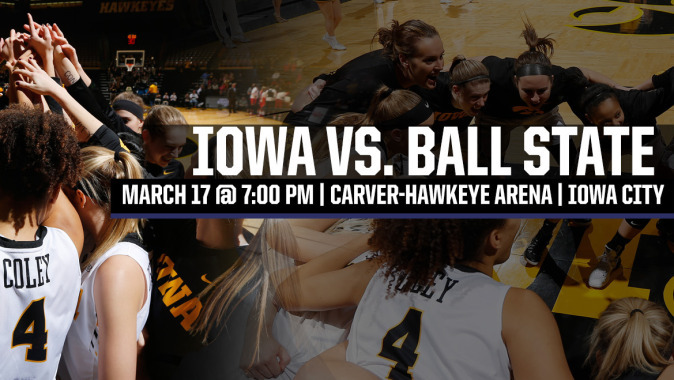 Iowa opens WNIT play against Mid-American Conference member Ball State (21-9, 13-5). Tip time is set for 7 p.m. (CT). The Cardinals finished runner-up in the West Division in the regular season to earn a No. 3 seed in the conference tournament. Ball State was bounced in the quarterfinals, 67-53, by 6th-seeded Eastern Michigan.

The victor of the Iowa and Ball State matchup advances to face the winner of Saint Louis and Little Rock in WNIT Second Round action March 19-22. Location, date, and tip time is TBA.

In its last WNIT appearance in 2005, Iowa defeated Creighton, 67-52, in Iowa City in the first round, Nebraska, 71-67, in Lincoln in the second round, and Arkansas State, 66-52, in Cedar Rapids, Iowa, in the quarterfinals. The Hawkeyes’ run ended in the semifinals with an 89-80 loss to Missouri State in Springfield, Missouri.

Iowa is one of six Big Ten Conference teams (Minnesota, Michigan, Nebraska, Northwestern, Rutgers) and one of three teams from Iowa (Drake, UNI) to be included in the field of 64 this season.

UI season ticket holders can purchase tickets through the UI Athletics Ticket Office between 9 a.m. (CT) and 5 p.m. Tuesday by calling 1-800-IA-HAWKS or visiting hawkeyesports.com. Non-season ticket holders can purchase tickets after 5 p.m. Tuesday. Tickets are $12 for adults, $8 for youth (18 and under), and free for UI students.