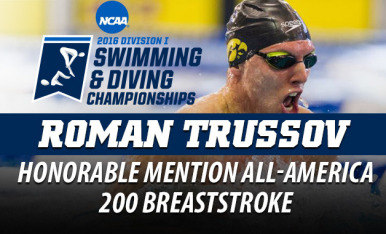 The Kazakhstan native finished 13th in Saturday night’s “B” final in the 200-yard breaststroke with a time of 1:55.24. Trussov earned a second swim and cemented his All-America distinction by finishing with a time of 1:55.36 for the 15th-fastest time in the 41-swimmer field.

Iowa also got an 18th place finish from senior Addison Boschult off the platform with a score of 356.65. The Omaha, Nebraska, native was two points shy of being in the top 16 and earning honorable mention All-America honors for a second straight season.

The Hawkeyes finished 40th in the team standings with 6 points.