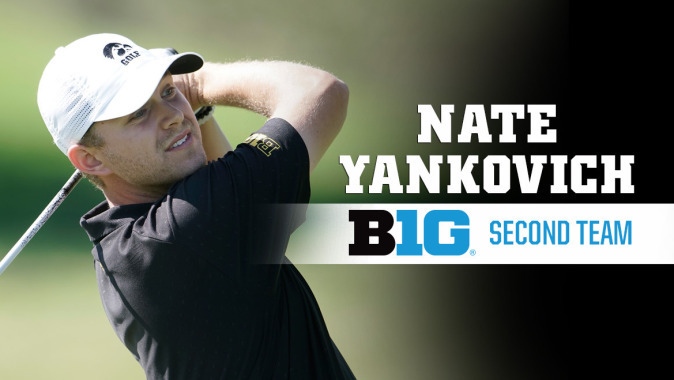 Iowa now has 30 All-Big Ten honorees in program history and has had at least one golfer earn all-conference laurels in each of the last six years.

Yankovich, a native of Blacklick, Ohio, is enjoying the best season of his Hawkeye career. He has produced three top 10 finishes after having only two total in the previous three seasons combined. His third-place finish at the Hawkeye Invitational two weeks ago marked the best finish of his career. Yankovich is averaging 71.96 strokes per round this year, which leads the team and is 3.33 strokes better than last year’s average.

The 2015-16 season has seen Yankovich card the best 18-hole and 54-hole scores of his career. He has carded a six-under-par 66 two times this season, with the most recent coming in the middle of March at the Schenkel Invitational. His best 54-hole score came in the fall at the Golfweek Conference Challenge, where he fired a 209 (-7) to help the Hawkeyes capture the team title.

Yankovich and the Hawkeyes, ranked 49th nationally, have advanced to NCAA competition in each of the last seven seasons. This year’s selection show will air on Golf Channel on May 5 at 8:30 a.m. (CT). NCAA Regional competition will take place at six sites from May 16-18.