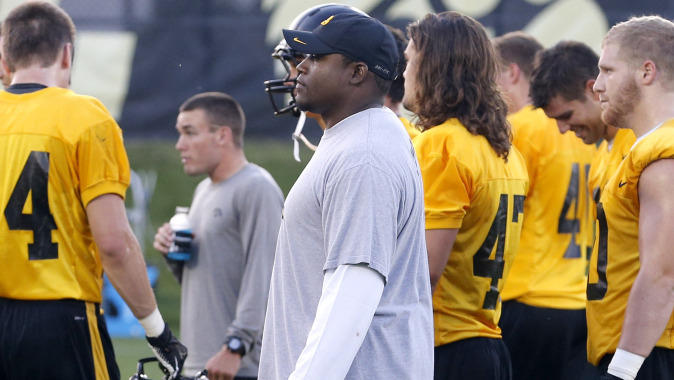 “Broderick and Tyler bring important strengths to complement our coaching staff,” said Ferentz. “A comprehensive recruiting program and a proactive player development program are critical to our continued success.”

Binns, a four-year letterman for the Hawkeyes during his playing career, has served as a graduate assistant coach with the Hawkeyes the past two seasons, assisting with the special teams.

Binns, a native of St. Paul, Minnesota, enjoyed a successful playing career as a defensive end for the Hawkeyes from 2008-11. He earned second-team All-Big Ten honors as a senior and earned the Roy J. Carver Most Valuable Player Award for defense. He was a three-year member of the Iowa Leadership Group during his career.

Binns earned his bachelor’s degree in psychology from Iowa in 2012. He was employed as a teacher and coach at Cretin-Derham High School in St. Paul, Minnesota, prior to joining the Iowa staff as a graduate assistant, coaching football, basketball and track. He is pursuing a master’s degree in sports management.

“Broderick has been a valuable contributor to our success the past two years,” said Ferentz. “With his experience in the program as both a player, and graduate assistant coach, Broderick has a full understanding of the program and what it takes for us to have success. We are excited to have Broderick as a full-time member of our support staff.”

Barnes rejoins the Iowa staff after serving on the Vanderbilt University football staff the past three years. He held the position of director of player personnel the past two seasons after serving as co-recruiting coordinator in 2013.

“Tyler also returns with several years of experience within our program,” said Ferentz. “His added experience from another high-quality college football program allows him to bring valuable input and insights to our program.”

Barnes is married to Joanne Ferentz, coach Ferentz’s daughter. The hiring of Barnes followed all University of Iowa nepotism policy requirements. Barnes is a native of Decatur, Illinois, and a graduate of MacArthur High School.