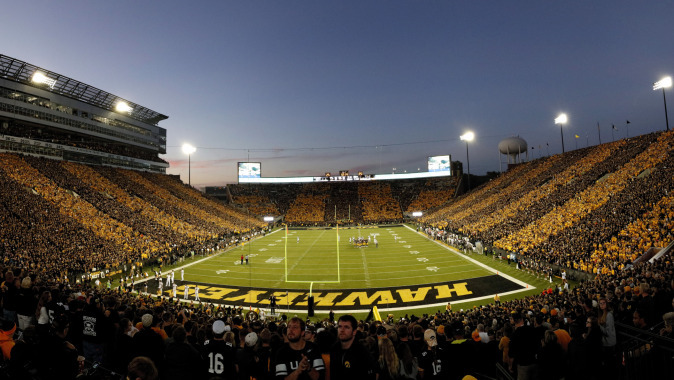 IOWA CITY, Iowa – – The University of Iowa will host Iowa State in the Iowa Corn Cy-Hawk Series football game in prime time in Kinnick Stadium. The Sept. 10 contest will kick at 6:30 p.m. and will be televised to a national audience on the Big Ten Network (BTN).

In addition, Iowa’s Big Ten contest at Penn State (Nov. 5) will also air on BTN, with a start time of 6:30 p.m. CT. The Hawkeyes will play three night games in 2016, as the home contest against Michigan (Nov. 12) will start at 7 p.m. CT and will be televised by ABC/ESPN/ESPN2.

BTN announced its selection of prime time games Monday. All prime time requests must receive the consent of the Big Ten Conference and the home team before being confirmed.

“Competing for the Iowa Corn Cy-Hawk Trophy under the lights in Kinnick Stadium will provide a great atmosphere for our fans, and will serve as a showcase for our historic venue to a national audience,” said UI Director of Athletics Gary Barta. “We are excited to host two night games for the second straight season. Being selected for three prime time games overall is a reflection of our past success and respect for our product.”

The Iowa Corn Cy-Hawk Series contest has been designated as Iowa’s Black and Gold Spirit Game, with the annual stripping of Kinnick Stadium set for the evening in-state meeting. Iowa and Iowa State have played just one evening game in Kinnick Stadium, with the 2002 contest starting at 5 p.m.

Iowa completed a perfect home slate in 2015 (7-0), and marked the first time the Hawkeyes hosted two prime time events in the same season. Overall, Iowa holds an 8-4 record in night games in Kinnick; seven of the 12 games have started after 7 p.m.

Iowa and Penn State will meet for the first time since 2012, with that meeting played in prime time in Kinnick Stadium. The Hawkeyes defeated the Nittany Lions 21-10 in 2009 when the teams last met under the lights at Penn State.

The Iowa Corn Cy-Hawk Series game will be the first of three trophy games for the Hawkeyes in Kinnick Stadium in 2016, as Iowa also hosts Wisconsin and Nebraska. Iowa holds a 41-22 series advantage over Iowa State and holds possession of the Cy-Hawk Trophy following a 31-17 win in Ames last season.

Single-game tickets are not available at this time. Questions concerning the purchase of 2016 football tickets, including general public, UI faculty/staff and UI student seasons tickets by current UI students, should be directed to the UI Athletics Ticket Office. The office is open weekdays from 9 a.m. to 4 p.m. The office telephone number is 1-800-IA-HAWKS. Information is also available at hawkeyesports.com/tickets.