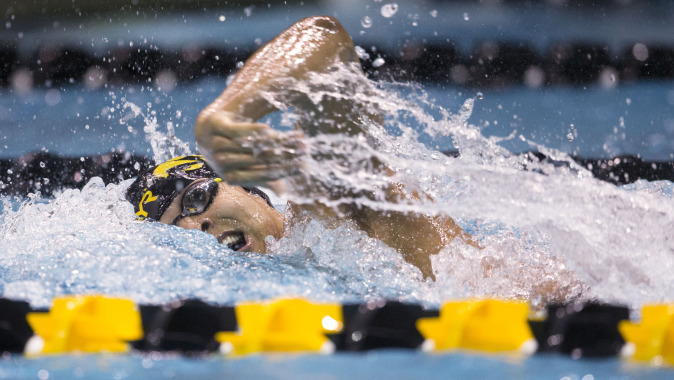 IOWA CITY, Iowa — University of Iowa senior swimmers Maddie Bro and Charles Holliday have been selected to receive NCAA postgraduate scholarships. The one-time non-renewable scholarships of $7,500 are awarded three times a year corresponding to each sport season (fall, winter and spring) to student-athletes who excel academically and athletically and are at least in their final year of intercollegiate athletics competition. Each season there are 29 scholarships available for men and 29 scholarships available for women for use in an accredited graduate program.

Bro is a four-year letterwinner in the freestyle and backstroke. The Ames, Iowa, native, will graduate with a 4.0 grade-point average and the highest distinction with a double major in journalism and mass communication and gender, women’s and sexuality studies. A Big Ten Distinguished Scholar and three-time academic All-Big Ten honoree, Bro has been named to the UI Dean’s list seven times and the UI President’s list twice during her collegiate career. She plans to attend law school in the near future, and will start as a Project Manager for Frank N. Magid Associates in June.

Holliday led the Hawkeyes in the 50-yard freestyle as a senior in 2015-16. He swam an NCAA “B” qualifying time of 19.97 seconds at the 2016 Big Ten Championships, the eighth-fastest time in program history. The Rock Island, Illinois, native will receive his bachelor’s degree in human physiology this month, and plans to attend medical school at the University of Michigan. Holliday has conducted microbiology research funded by NASA, was on the UI Dean’s List for six semesters, and was also a UI President’s List honoree. This fall, Holliday will join the Black Medical Association, where he will mentor young minorities and advocate for diversity and health equity in medicine. Holliday was a semifinalist for the Arthur Ashe, Jr., Sports Scholar Award, for which there were more than 1,000 nominations. He was also chosen as one of Iowa’s two recipients of the Big Ten Conference Postgraduate Scholarship earlier this month.

The NCAA Postgraduate Scholarship was created in 1964 to promote and encourage postgraduate education by rewarding the Association’s most accomplished student-athletes through their participation in NCAA championship and/or emerging sports. Athletics and academic achievements, campus involvement, community service, volunteer activities and demonstrated leadership are evaluated. An equitable approach is employed in reviewing an applicant’s nomination form to provide all student-athlete nominees an opportunity to receive the postgraduate award, regardless of sport, division, gender or race. In maintaining the highest broad-based standards in the selection process, the program aims to reward those individuals whose dedication and effort are reflective of those characteristics necessary to succeed and thrive through postgraduate study.