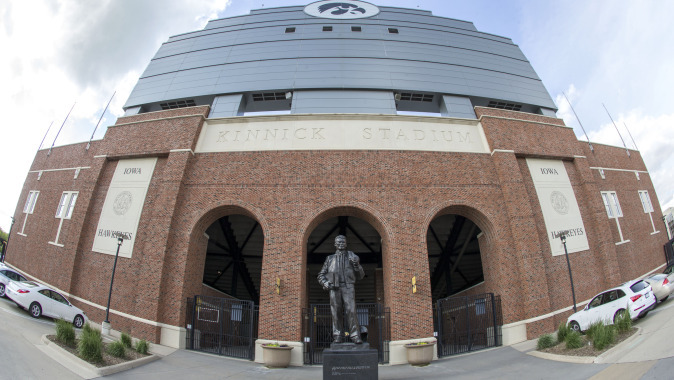 IOWA CITY, Iowa — You won’t find an arms race among the football support staff at the University of Iowa. In fact, UI head coach Kirk Ferentz employs a “work smarter” approach that has served the Hawkeyes well for 17 seasons.

“If you want to look at programs at the far end of (support staff numbers), we’re not even remotely in that neighborhood and we don’t want to be,” Ferentz said. “It’s about everybody having a specific job, executing their responsibilities, and communicating. It can be counter-productive if you have too many people involved.”

Still, this isn’t your grandfather’s Forest Evashevski-era Hawkeye program. It’s not even your father’s Hayden Fry-era Hawkeyes. The advance of technology has made sure of that.

There wasn’t Instagram, Twitter, Facebook, or Snapchat when Ferentz looked into continuing his football playing career in college in the 1970s. Then, a college might mail a letter to a perspective student-athlete and an assistant coach might visit the high school in the winter of his senior year.

In today’s fast-paced, instant-information world, college programs are already projecting who will inhabit their rosters in 2019. In other words, they are evaluating the talent of boys entering 10th grade of high school.

“I don’t feel we’re behind, but there are a lot of people doing a lot more,” Ferentz said. “There are certain conferences in the country that have gone overboard on this.”

So much so that capping the number of support staff personnel is a topic of interest to the NCAA.

On-field results indicate that the Hawkeyes are evolving well with the times and with a comfortably-sized staff. They finished in the top 10 of both the coaches and media poll after going 12-2 in 2015, winning the Big Ten Conference West Division and playing in the Rose Bowl Game. Iowa did it with a football program that’s total salary compensation falls well below conference rivals Michigan, Ohio State, and Nebraska.

“Our program is still more centered on development,” Ferentz said. “That is what we have to do if we’re going to be good. That’s the most important thing, whether it’s a coach or someone who specializes in recruiting. They have to understand how things work here so we’re trying to identify prospects that are going to flourish with the way we do things. It’s not just a talent contest.”

Barnes returns to the Hawkeyes after spending three seasons at Vanderbilt under two different head coaches. He had five opportunities to leave Vanderbilt for schools in Power Five conferences. An opportunity at Iowa was too tempting.

“When you’re away from this place you realize how special it is,” Barnes said.

The journey Barnes took back to Iowa is not unlike paths taken by Kirk Ferentz, Wallace, Bell, offensive line coach Brian Ferentz, tight ends coach LeVar Woods, Binns, and assistant director of football operations Ben Hansen. They all played for or were part of the Hawkeye football program and left for other playing or work opportunities before returning to Iowa City.

“When we have a chance to bring someone back into our program that knows our culture, how we operate, and what we’re looking for, it is a no-brainer,” Ferentz said. “It keeps us moving forward without a lot of transition and orientation. We have brought guys back into the program that have gained new perspectives and ideas.”

While at Vanderbilt, Barnes was the NFL liaison who helped organize Pro Day. He was also the compliance liaison, initial screener for recruits, and he planned recruiting visits. Barnes will work with Bell and Southmayd on many of those projects at Iowa.

“I will have a hand in anything that will touch the recruitment of the potential student-athlete, one way or another,” said Barnes, whose position by NCAA rules is not allowed to recruit off campus.

His days in Nashville, Tennessee, and within the Southeastern Conference were beneficial.

“Being in a different region of the country was huge,” Barnes said. “Vanderbilt wasn’t much different from Iowa in what we were looking for. We wanted high-character, smart, and tough kids. It’s the same here.”

Barnes’ relationship with Kirk Ferentz (son-in-law) prompted the Athletics Department to take additional steps during the hiring process. His salary and compensation package, reporting line, and other aspects of his employment were carefully vetted and followed university protocol. Barnes will report to deputy director of athletics Gene Taylor and an annual management plan will be followed. Similar plans for Brian Ferentz and associate head wrestling coach Terry Brands, the brother of head coach Tom Brands, have met with success over the years.

Southmayd is involved in the overall recruiting operations, identifying prospects and managing the recruiting data base. He does research and compiles information on prospects.

“At Iowa, we take pride in finding those diamonds in the rough,” Southmayd said. “We want to make sure we’re not missing anyone we think is Hawkeye material.”

Technology makes that a more tedious task. The days of 16 millimeter film and VHS tapes are over. Every potential Division I football recruit — and thousands who are not — have easily accessible highlight “reels” available on Hudl, a virtual online recruiting store. The challenge is having a qualified eye evaluate the footage to uncover all those who are “Hawkeye material.”

“Because of technology, there is so much film and tape available to go through, but not everyone is a DI-caliber player,” Southmayd said.

Allen, who graduated from the University of Colorado and worked in the football program there, designs graphics that are sent to recruits and their parents. He also dabbles in photography and creates content for Hawkeye football-specific social media. He is the person behind messages that go out to 123,000 Twitter, 57,000 Facebook, and 50,000 Instagram followers.

“Your message and word cannot get diluted,” Allen said. “It’s a team effort among the coaches, recruiting support staff, and myself. Even the strength staff at times asks for content that sells the unified message we want to get across to perspective student-athletes, fans, and alumni.”

When it comes to recruiting, Hansen assists with events and is in charge of ordering all displays inside the Stew and LeNore Hansen Football Performance Center.

By design, the support staff at Iowa is among the smallest in the Big Ten, but it is effective with proven results.

“The re-organization of the entire support staff is something Kirk has been working toward for some time,” said Gary Barta, UI director of athletics. “The administrative staff that deals with recruiting and player development is critical toward the success of the program, on the field, academically, and socially.

“A key part of the equation is the size of the staff and the compensation provided. Kirk and I are annually looking at the salaries of his coaches and his administrative staff. The market shifts quickly and we have to make sure our salaries are competitive with our peers in the Big Ten and the other Power Five conferences.”

The Hawkeyes remain one of the most successful football programs nationally, with seven bowl appearances in the past eight seasons. But if you’re looking for them to be ranked near the top in support staff size, forget it.