Close to Perfect Distribution in Swarm17 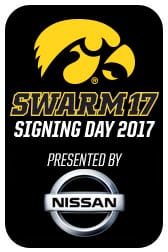 “Twenty-two was the number we were shooting for,” Ferentz said. “I won’t say the distribution is perfect, but it was close. I think we did well on those projections and a lot took place in the last two-plus weeks. That’s typical for us. We’re not going to get an entire class committed in December. I don’t think that’s realistic if we want the best guys to come into our program.”

Ferentz said the entire roster of new Hawkeyes is not only loaded with quality, but all 22 embrace the program’s core values of work ethic, passion for the game, competitiveness, mental toughness, being selfless, and having a desire to improve.

“We want to get the best guys in the state, that’s always by design,” Ferentz said. “Sometimes they’re going to be close, sometimes they may be in the far west.”

Ferentz said that in a perfect world, the program will hire replacements for assistant coaches Bobby Kennedy and Chris White soon.

“In the next two or three weeks I would like to get everybody in their seats,” Ferentz said. “It’s important that the coaches get here and start learning, most importantly getting to know the players they’re going to work with.”

Since the Hawkeye staff was short-handed over the last month, director of recruiting Tyler Barnes and director of player personnel Scott Southmayd hit the trail under the leadership of recruiting coordinator Kelvin Bell.

“We went to the bullpen and Tyler Barnes and Scott Southmayd did a great job filling in where we were short,” Ferentz said. “And I certainly want to commend the leadership of Kelvin Bell.”

Spring practice for the Hawkeyes will tentatively begin March 22. The annual practice in Des Moines, Iowa, is set for April 7, and the final practice of the spring will be Friday, April 21, under the lights of Kinnick Stadium.