IOWA CITY, Iowa — The University of Iowa soccer program signed seven players that will join the Hawkeyes in the fall, it was announced Thursday by head coach Dave DiIanni.

Four of the seven-player class are from Illinois, and players also hail from Iowa, Arizona, Colorado, and Wisconsin.

“Our class of 2018 is a good combination of speed, competitiveness, and talent,” said DiIanni. “This class will enter into the program and immediately give us a deeper, more talented roster to help us continue the journey of climbing the ladder in the Big Ten Conference.

“This a highly-rated group of players who are equally gifted in the classroom. They will represent Hawkeye Nation very well.” 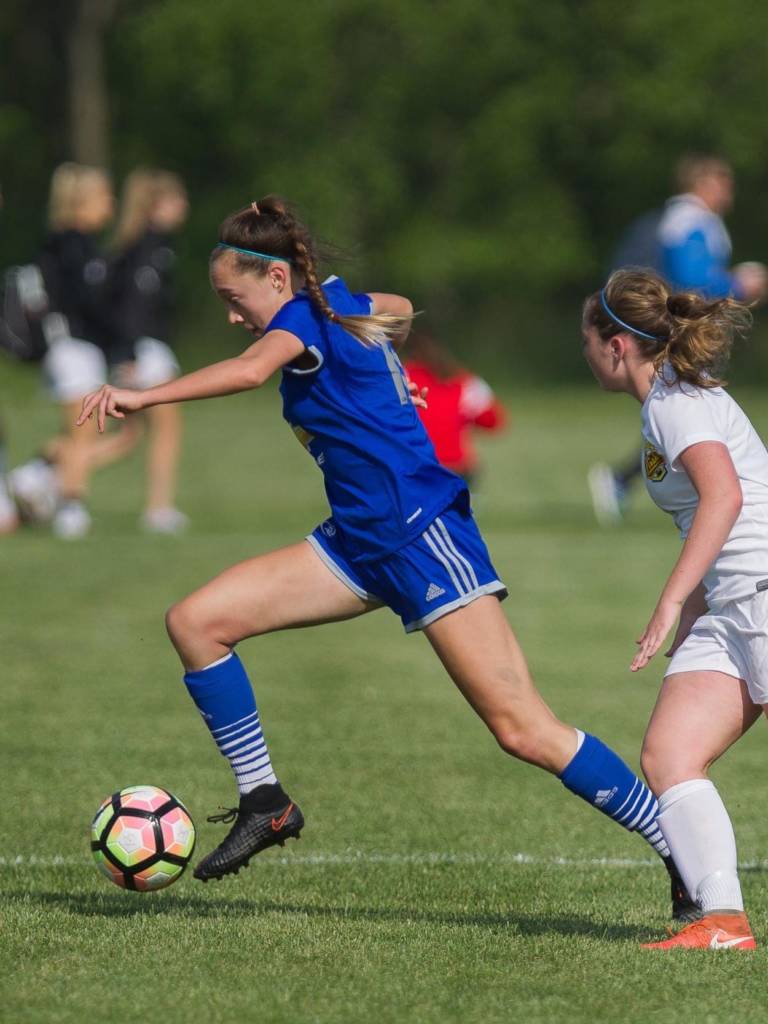 Why Iowa? — “It was during our tour that I fell in love with Iowa — the campus, environment, coaches, everything. My parents always told me college would be some of the best years of my life, and I knew Iowa was the school for me both academically and for soccer. I left campus feeling that if I chose to play soccer for Iowa, I would thrive and grow as a player and person. I wouldn’t want to play for any other school and I am so happy and excited for my future as a Hawkeye.”

DiIanni on Alward — “Skylar has an incredible work ethic and competitive spirit. She has the ability to stretch the game behind the line, be a connector, and link up with players. She is a very good first line of defense forward who will work incredibly hard to win the ball back.” 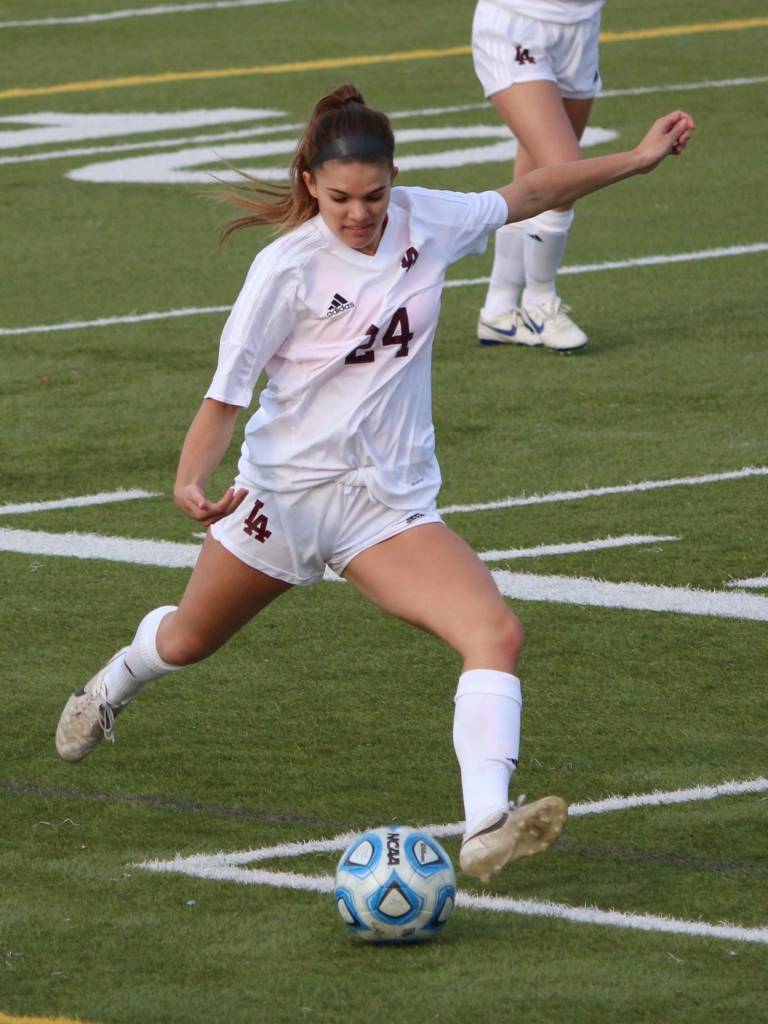 High School — Two-time all-conference selection… all-area and team MVP as a sophomore… team captain as a junior and senior… missed junior season because of injury… has scored eight goals and tallied 12 assists… led team to a 39-8-6 record as a freshman and sophomore and to GCAC and regional titles… played club soccer for FC United UC13-17, where she was team captain… was a 2017 Phoenix President’s Day Tournament finalist, 2016 San Diego Surf Cup semifinalist, and 2016 CASL Showcase champion… also a member of the U-18 FC United Developmental Academy Team… played on the Illinois ODP team for five years, helping team to a 2016 title… also played in Region 2 ODP ID Camp in 2016… Loyola Honors Scholar from 2015-18… high school coach was Craig Snower… club coaches were Craig Snower and John Soltani.

Personal — Born March 18, 2000… daughter of Bill and Heidi Burns… has three siblings — Corey, Johnny, and Devin… Corey played soccer at Iowa from 2013-17, while Devin is a junior for the Hawkeyes… pre-medicine major.

Why Iowa? — “I chose Iowa because Iowa is family to me. Being a Hawkeye has always been in my blood. I love everyone and everything about Iowa. I love the traditions and welcoming atmosphere of everyone who attends. It has been a dream of mine for a long time to wear the Hawkeye jersey, so attending Iowa is an honor. I always have and always will bleed black and gold.”

DiIanni on Burns — “Riley is a versatile player, who can play in all three lines on the field. She has great composure on the ball and is a very technical player. Riley understands and reads the game at a very high level. She is one of three Burns sisters to come through the Iowa soccer program, so she understands the commitment required to be successful.” 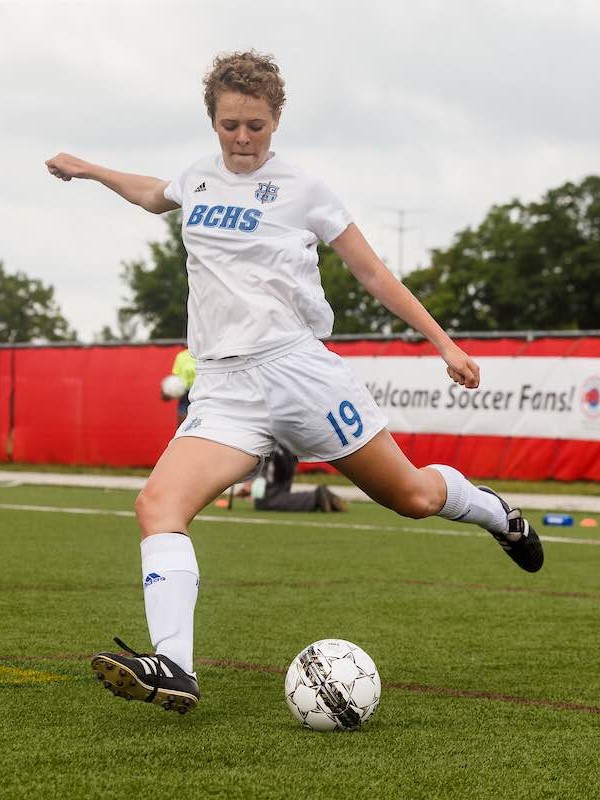 High School — Two-time all-conference selection… Team MVP as a junior after scoring 17 goals and tallying 14 assists for a 17-win team… voted as team Offensive Player of the Year as a sophomore after scoring 13 goals and registering 15 assists… scored eight goals and had six assists as a freshman… helped team to a state title as a junior and three Greater Metro Conference titles… played club soccer for SC Waukesha from 2009-17, where team was a five-time state champion and a 2015 Midwest Region semifinalist… also played for Elmbrook United in 2017-18, where she was team captain… 2018 National Merit semifinalist… four-year Honor Roll… 2017 AP Scholar Award… 2018 Presidential Scholar candidate… class secretary from 2014-16… also played basketball, where she was team captain as a senior… high school coach was Dan Maki… club coaches were Xavi Rico, Pat White, and Troy Dusosky.

Why Iowa? — “I am excited to play soccer at the University of Iowa because it is a prestigious institution as well as an outstanding Big Ten soccer program. The coaching staff at Iowa has an impressive track record in building great programs, and I look forward to adding onto the team’s past success. As a leader in health sciences, Iowa is also a great place to pursue my interest in the medical field. For all of these reasons and many more, I am proud to be part of Iowa’s class of 2022.”

DiIanni on Cape — “Jenny is someone we have known about for two years since she came to our camp in the summer and performed well. She is a crafty and elusive left-footed forward who can be dangerous on set pieces and in the final 1/3 service from the width.” 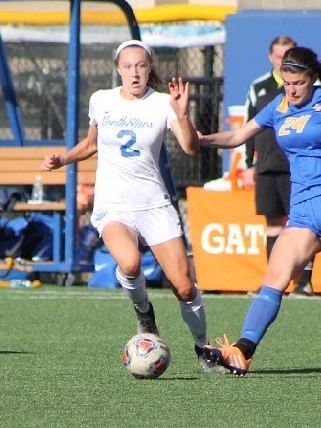 Why Iowa? — “I chose Iowa because I liked the environment and community. The people and coaches are amazing and it is a good distance away to still make me feel at home.”

DiIanni on Rydberg — “Hailey is very good with an elite level frame and soccer mind. She can play anywhere in the midfield and is effective off the dribble or a final pass. She has a knack for scoring goals and leading her team with her work ethic and competitiveness. We look for Hailey to make an immediate impact next year.” 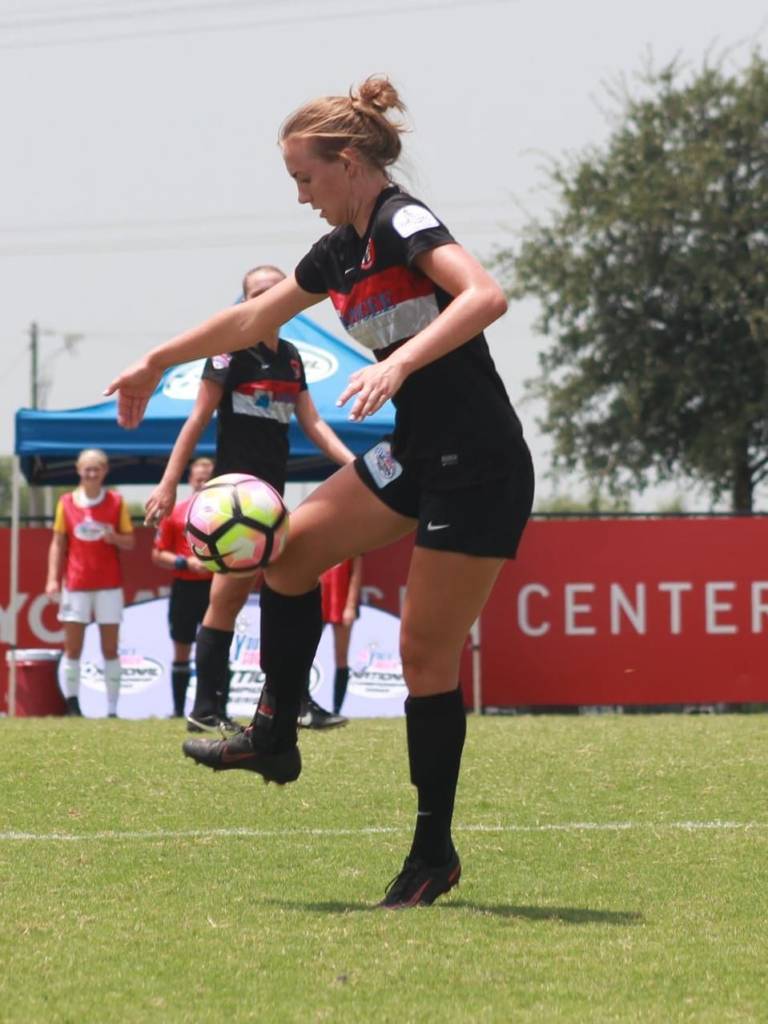 Personal — Born May 25, 2000… daughter of Tim and Brandy Wheaton… has two brothers, Justin and Ryan… majoring in criminology.

Why Iowa? — “I chose to continue my soccer and academic career at the University of Iowa because of the overall excellence the school provides. Getting a degree from a Big Ten university is something that is appealing to me and growing up in Arizona, I knew I wanted to go somewhere that had seasons. The school offers a wide range of academic courses, while providing an outstanding soccer experience. I fell in love with the coaching staff, players, and facilities instantly. My mom’s side of the family is from Iowa so I often visited the area. I fell in love with it as a little girl and it is a-dream-come-true that I get to be a Hawkeye the next four years.”

DiIanni on Wheaton — “Sara is a natural leader whose teammates have the utmost respect for as a soccer player and person. She is composed on the ball, has good range of pass, and is a good individual defender. She has the ability to be dominant in the air all over the field.” 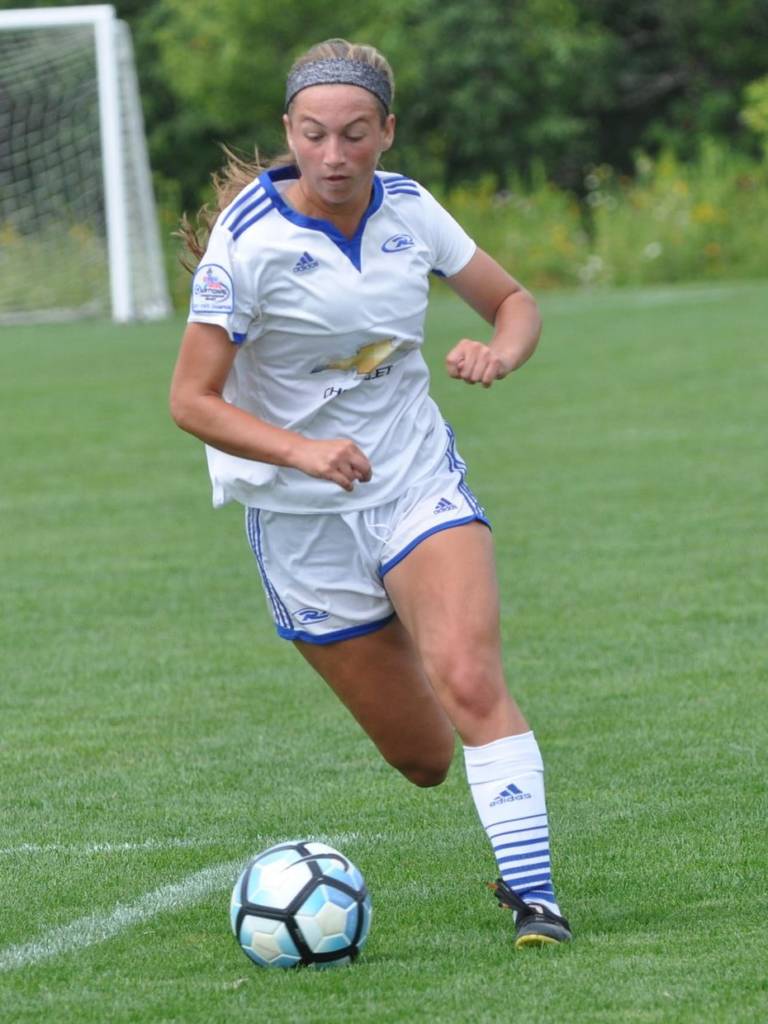 High School — Played club soccer, competing for the Iowa Rush since 2004… was a State Cup champion from 2013-14 and 2016-18… helped team to Region II Championships from 2013-18 and to a Midwest Regional League title in 2018… member of the Rush National Select Team from 2013-15 — a team that trained in Europe… Rush team captain… played on the 1999 Iowa ODP State Team from 2012-15… was a Region II Camp participant from 2012-15 and was in the Region II Pool in 2015… played for the Michigan Hawks club team in 2015-16… recipient of the Presidential Academic Achievement Award and was on the Honor Roll… member of the National Honor Society… club coach was Daryl Brazeau.

Why Iowa? — “I chose to attend the University of Iowa because when I visited the campus it felt like home. I appreciated the quality of the coaching staff and felt they would push me to my full potential. I also felt that Iowa would give me a good education in the major I wanted to pursue.”

DiIanni on Whitaker — “Riley is a versatile left-footed player who can play as a defender or a forward with room to grow into a central player. She loves to play the game and is a soccer junkie who will improve every year at Iowa. She has good range of pass and can strike a ball from distance.” 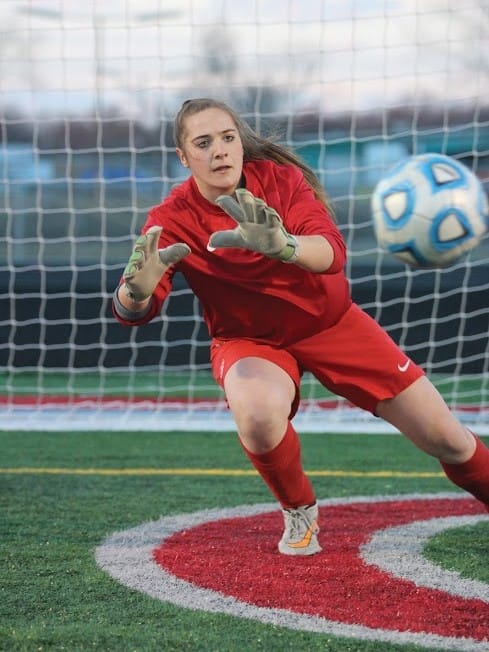 High School — Team MVP and team captain as a junior… three-time all-conference, all-area, and all-sectional honoree (honorable mention all-sectional as freshman and sophomore)… has led team to 35 victories in first three seasons (35-24-9 record)… has made 263 saves and posted 30 shutouts in 68 career games.. had 82 saves and eight shutouts as a freshman, 93 saves and 10 shutouts as a sophomore, and 88 saves and 12 shutouts as a junior… led team to the regional final in 2015 and 2017… played club soccer for Lindenhurst Area Soccer Club from 2007-16… also played at FC United Pre Academy from 2016-18… team was the Disney Showcase Champions in 2017, was a regional qualifier in 2017-18, a State Cup finalist in 2017, and played in the National League… named to the 4.0 Academic Honor Roll all four years… was a Ben Carson Scholar… named to National German Honor Society, National Honor Society, and Quill & Scroll International Journalism Honor Society… high school coaches were Marni Polakow and Matthew Bohmann… club coach was Craig Snower.

Personal — Born Feb. 26, 2000… daughter of Rick and Tricia Wilhelm… has an older brother, Steven… intends to major in education or athletic training.

Why Iowa? — “I chose Iowa because it has quickly become a place that I cannot wait to call home. From the moment I stepped foot on the University of Iowa, I instantly fell in love with the Hawkeye pride that can be seen across the nation, the welcoming campus, and the ??outstanding women’s soccer program. For as long as I can remember, it has been my dream to play Big Ten soccer. Having the opportunity to play for a school with high academic standards as well as a soccer program with such dedication, passion, and talent is surreal to me. Every day I get closer to becoming a Hawkeye, and I have never felt more ready to fight for Iowa.”

DiIanni on Wilhelm — “Monica is a great athlete with a lot of potential. She does a good job moving her feet and covering ground and is dominant inside the box. She has shown the ability to make big saves and keep her team in games.”