IOWA CITY, Iowa — At Emily Graber’s 20-week ultrasound with her local doctor, she and her husband, Darin, expected good news about their baby, Gabe (Prairie City, Iowa). But after a while, it was clear something wasn’t right.

“They asked us to come back and talk to the doctor,” remembers Emily. “When we sat down at that desk, I was totally shocked to hear the words ‘congenital heart defect.'” 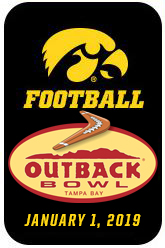 “His right ventricle never fully developed, and his left ventricle was responsible for handling the whole function of his heart,” explains Emily.

“It was really scary to get that diagnosis,” adds Darin.

Growing up near Iowa City, Darin was familiar with University of Iowa Stead Family Children’s Hospital and wanted to meet with its pediatric cardiology specialists.

“Meeting with the cardiology team for the first time was eye-opening,” says Emily. “It also gave us a lot of comfort and hope. While we felt like we were on an island, (the doctors) were used to dealing with it all the time. They were the experts.”

“It was an easy decision for us to come here,” says Darin. “There was no doubt that this was the right place for us to have our son.”

Typically, a series of three surgeries are required to correct double-inlet left ventricle — one shortly after birth, one at around 6 months of age, and one between ages 2 and 5. When Gabe was born in January 2005, his care team learned that his heart was doing well enough to only require two surgeries. His first procedure took place when he was 6 months old.

“One of the hardest things a parent can do is hand your child over for surgery when you don’t know if you’re going to see them again,” says Emily. “The fact that we were with a team we felt super comfortable with meant everything to us.”

His initial surgery was a success, and Gabe was able to go home from the hospital. Two years later, Gabe underwent his second heart surgery.

“A few days after that, we realized he couldn’t move his left side at all,” recalls Emily. “It was determined that Gabe had a stroke and he spent three weeks in the hospital recovering.

“Gabe is extremely resilient and a fighter. When we left the hospital, Gabe wasn’t able to walk; he was totally paralyzed on his left side. But within two months, he was walking again.”

“We had wrapped our arms around congenital heart defects, but to now have to face a brain injury, and what that entailed felt unfair for Gabe to have to do,” says Emily.

Gabe took medication to alleviate his seizures, but none worked. In March 2017, he had a hemispherotomy to disconnect the right side of his brain. Since then, he has been seizure-free.

“He has been like a changed person,” says Darin. “He has a lot more confidence. He’s more engaging with people. That surgery has been a wonderful thing for Gabe and our family. It really helped him change his life.”

The Grabers are grateful for the care team that has supported Gabe since birth.

Emily says, “The most important thing is finding the right care, and we felt like we found that here.”