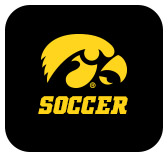 Rydberg, a midfielder from St. Charles, Illinois, has played in 39 career games with 24 starts during her first two seasons as a Hawkeye. Rydberg has scored three goals, including one game-winner, and has one assist in 1,650 career minutes.

Whitaker, a defender from Ankeny, Iowa, has started 37 of 38 career games, where she has scored two goals and tallied four assists. Whitaker was named to the Big Ten All-Tournament team as a sophomore – a season where she was named Iowa’s Defensive Player of the Year. Whitaker was the program’s Newcomer of the Year in 2018 as a freshman.

Iowa’s fall season has been postponed because of the global coronavirus pandemic. The 2020 season will be played in the spring with a start date of Feb. 3.