IOWA CITY, Iowa – University of Iowa senior kicker Keith Duncan is one of 30 NCAA Division I FBS candidates to be nominated for the 2020-21 Senior CLASS Award. CLASS stands for Celebrating Loyalty and Achievement for Staying in School and focuses on the total student-athlete and encourages students to use their platform in athletics to make a positive impact as leaders in their communities. 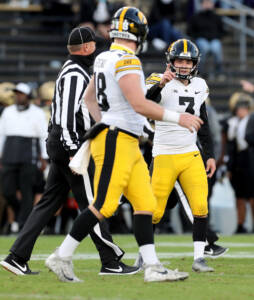 To be eligible for the award, student-athletes must be football seniors and have notable achievements in four areas of excellence: community, classroom, character, and competition.

Duncan, a Weddington High School (N.C.) graduate, was a 2019 consensus All-American, one of three 2019 Lou Groza Award finalists, and the reigning Bakken-Anderson Kicker of the Year in the Big Ten. This season, Duncan is a 4-of-5 on field goal attempts, including a long of 47 yards against Northwestern, and a perfect 11-of-11 on PATs.

He is a member of Iowa’s 2020-21 Leadership Group. Joining the Iowa football program as a walk-on, Duncan was granted a scholarship in the fall semester of 2019.

Ten finalists will be announced at the end of the regular season, with the winner being selected in December through a nationwide vote available to media, coaches, and fans.