IOWA CITY, Iowa — When Anze Fers Erzen altered his out-of-pool priorities, he took off for the University of Iowa men’s swimming and diving program.

“Freshman year, coming from Europe where everything is so different, it’s easier to go with the flow,” said Fers Erzen, a native of Ljbljana, Slovenia. “Last year, I settled in so it was easier to control all the variables.

“After gaining more experience, I felt it was the time to commit, so I did everything I could and went from there.”

“I was always working hard in practices,” he said. “The big changes came outside the pool.”

Fers Erzen ended his sophomore season as a College Swimming and Diving Coaches Association of America (CSCAA) All-American in the 200 backstroke — the first by a Hawkeye in the event since 1988. He was also one of three recipients of Iowa’s Swimming MVP Award and was the sole honoree for the Irving B. Weber Award.

“He takes care of himself and he’s driven and determined,” said Iowa head coach Marc Long. “He is always going to give his best effort. We never questioned how hard he was going to work. It was getting experience.” 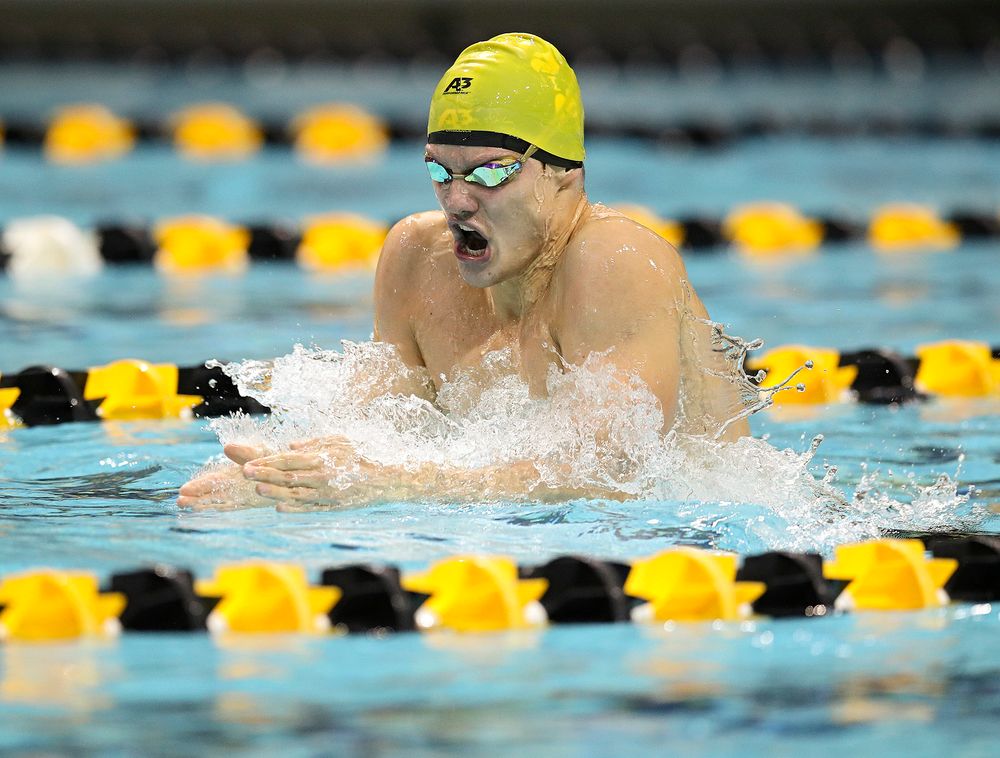 Fers Erzen was late to the pool party. His mother, Svarunja, wanted to teach him to swim at 8-years-old, but Fers Erzen wasn’t a receptive student.

“I would never listen to her,” he said. “I was a little kid doing what I wanted to do.”

That led to Svarunja enrolling Fers Erzen in summer school for swimming. He enjoyed it during the first year and returned.

“At one point a coach at the summer school asked if I wanted to transition into their proper training group,” said Fers Erzen. “He pulled me into the club team where I competed until now.”

Fers Erzen was a three-event finalist at the 2017 FINA World Junior Championships. He heard about European swimmers making the move to the United States to continue their swimming careers and made it a goal to put himself in position to follow.

“It’s impossible to be an elite athlete and student in Slovenia because our education system doesn’t allow it,” he said. “When I was in high school, I was thinking, let’s see where swimming takes me. I had friends that came to the U.S., competed here, and said it was a good experience. I was set on trying to find something here.”

One of Fers Erzen’s classmates — Matjaz Rozman — committed to the University of Iowa and that connection piqued Fers Erzen’s interest. He sent an email to the Iowa coaching staff and within an hour, he had a reply and an opportunity.

“Anze stood out and his versatility stood out,” said Long. “He is a put together, driven student and athlete and we felt that the development could continue and explode once he got here.”

When Fers Erzen arrived in Iowa City, his biggest obstacle was adjusting to the seven-hour time difference. Fers Erzen’s Hawkeye teammates helped with everything else.

“The thing that blew my mind was the team and how close it was,” said Fers Erzen. “Even though I didn’t know anyone except Rozman, there were 50 people I could talk to and they were going through the same things I was. It was like a second family, I found so many friends right away, so that made the transition so much easier.”

“After the realization sank in that this is the last year, if I wanted to keep swimming I had to go somewhere else. It was sad because initially I knew that swimming-wise and school-wise, we would all be fine. The hardest part is letting go of all the people you’ve met here and the friends you’ve made.”

Fers Erzen is leaning on those Hawkeyes this semester.

In August, the Iowa men’s and women’s swimming and diving program was informed it was being eliminated after the 2020-21 season because of financial implications from the coronavirus pandemic.

“This semester has been challenging with a combination of everything happening with us finding out the program was being cut, COVID, and with school mostly being online,” said Fers Erzen. “It has been hard, but overall as a team, we have been handling it well.

“The morale of the team might be better than it was last year even though last year was a normal year. It feels like everyone realized this is all the time we have together, so let’s make the best of it.”

Fers Erzen is grateful to have a semblance of normalcy with workouts.

“At home, most people aren’t able to train, maybe only the National Team members,” he said. “The fact that we have testing and a pretty normal schedule is more than I can ask for. I know other conferences are competing right now, but I will take what I can get at this point.”

Iowa is finding ways to compete. The team held an intrasquad championship-style meet from Nov. 18-20 at the Campus Recreation and Wellness Center. Fers Erzen unofficially broke his 200 IM school record, finishing in 1:45.08.

Fers Erzen has committed to continuing his career at Texas A&M next season. He looks forward to broadening his horizon in the Lone Star State, but he can’t shake the feeling of leaving the people he has met as a Hawkeye.

“After the realization sank in that this is the last year, if I wanted to keep swimming I had to go somewhere else,” he said. “It was sad because initially I knew that swimming-wise and school-wise, we would all be fine. The hardest part is letting go of all the people you’ve met here and the friends you’ve made.”

Before the NCAA granted a “free year” of eligibility, Fers Erzen planned to redshirt during the 2020-21 season. Now he is gearing up for a final shot to compete as a Hawkeye and with the people he’s grown to love.

“This year, I want to do the best I can and qualify for NCAAs again as a Hawkeye,” he said. “That would be a nice way to end. I want to lift my teammates up and make them realize that you can do whatever you want to do. I feel we can accomplish something special as a team and I want to focus more on that than myself.

“I wanted to stay (at Iowa) this year to spend as much time as possible with the people here. That way I can say my goodbyes in a proper way, move (to College Station, Texas) in the summer to start new next year.”