Then something clicked. And clicked again. And again.

When the final second ticked off the clock, the Hawkeyes rallied from a late 75-69 deficit to defeat Purdue, 87-81, on Mediacom Court in Carver-Hawkeye Arena. Iowa improved to 9-3 overall, 5-3 in the Big Ten and in the process, snapped a two-game skid.

“I liked the way we closed this game as opposed to our last one, so that was nice to see,” said Iowa head coach Lisa Bluder, referring to an 84-82 loss to Ohio State on Jan. 13. “You could feel our players thinking about last time, so it was good we put a stop to that and finished strong. I’m happy with our defense down the stretch.”

Bluder called timeout with just under five minutes remaining after Purdue’s Fatou Diagne made a fourth consecutive Boilermaker field goal. Then the Hawkeyes went to work.

Tomi Taiwo scored on a give-and-go layup, McKenna Warnock grabbed a defensive rebound, Monika Czinano scored in the lane off an assist from Kate Martin, Martin pulled down a defensive rebound. When Warnock made two free throws with 3:09 left, the game was tied, 77-77, and Iowa was not done.

Czinano corralled a defensive rebound and Warnock hit a 3-pointer giving the Hawkeyes an 80-77 lead — their first lead in more than seven minutes.

“Mon (Monika Czinano) got some double teams in the post because she had been doing amazing,” Warnock said. “She found an open kick-out and had a good pass to me and believed that I was going to make that shot.” 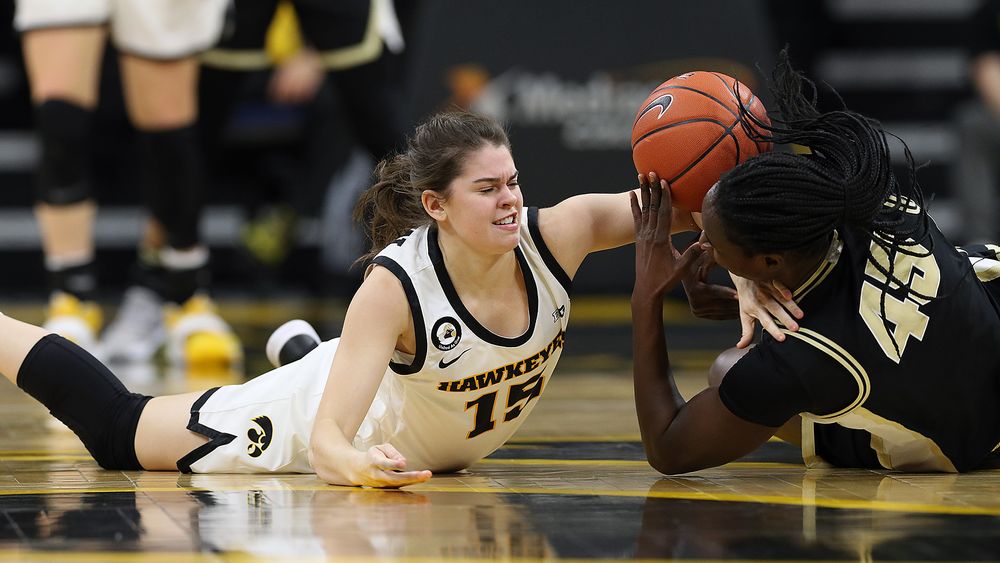 “I liked the way we closed this game as opposed to our last one, so that was nice to see. You could feel our players thinking about last time, so it was good we put a stop to that and finished strong. I’m happy with our defense down the stretch.”

Warnock also stepped up defensively with a blocked shot and was rewarded with a give-and-go layup from Czinano. That put Iowa ahead by five and had the Boilermakers scrambling.

“McKenna had a great game,” Bluder said. “She shot the ball well, got offensive rebounds and a couple of assists. She had a very good game.”

Warnock was perfect from the field (5 of 5 overall, 2 of 2 from 3-point) and made 7 of 9 free throws. She scored 19 points and had eight rebounds (three offensive).

A fourth-quarter switch in defense kept Purdue in check while the Hawkeyes extended their lead.

A recent defensive wild card has been Taiwo, who didn’t play in back-to-back games against Minnesota and Northwestern, then logged 10 minutes against Ohio State and 15 against Purdue. She scored five points and added two rebounds, a steal and a blocked shot.

“Tomi did a good job defensively, that’s why she is in there,” Bluder said. “She is proving it on the defensive end in practice.”

The Hawkeyes also feasted at the free throw line where they scored 20 more points than Purdue (25 to 5).