THIS WEEK
The ninth-ranked University of Iowa women’s gymnastics team travels to Champaign, Illinois, to face No. 18 Illinois on Sunday at 1 p.m. (CT) at Huff Hall. Due to the coronavirus pandemic, no fans will be allowed admittance.

FOLLOW LIVE
• Sunday’s meet will be televised on BTN+.
• Fans can follow along via live results at hawkeyesports.com.

WHAT YOU NEED TO KNOW
• The Hawkeyes have achieved the highest ranking in school history. The GymHawks are No. 9 in the Road to Nationals ranking for a second straight week with an average score of 196.500. The program’s previous best ranking came during the 2003 season when it was ranked 11th.
• Iowa currently has the No.1 national ranking on floor with a 49.400 average. The Hawkeyes have two of the top six floor gymnasts in nation in Lauren Guerin (t4th) and Clair Kaji (t6th).
• The Hawkeyes lead the Big Ten and are eighth nationally on balance beam and 11th in the country on uneven bars.
• The GymHawks currently have the second-best team score average in the Big Ten.
• Iowa has earned three Big Ten weekly honors through the first two weeks. Lauren Guerin was Specialist of the Week on Jan. 18, while Clair Kaji (Specialist of the Week) and Adeline Kenlin (Freshman of the Week) were honored on Jan. 25.
• The Hawkeyes shared or won three event titles in the victory over No. 13 Ohio State en route to a season-best score of 196.550.

A START FOR THE AGES
The Hawkeyes have catapulted up the national rankings early in the 2021 season. Iowa started the season ranked 25th in the preseason before jumping 16 spots to No. 9 in the rankings following a season-opening 196.450 at Minnesota. The national ranking is the best in program history.
• The Hawkeyes 196.450 was a high under Larissa Libby in a season opener and in the month of January. Iowa followed it up with a 196.550 in the decisive win over No. 13 Ohio State. 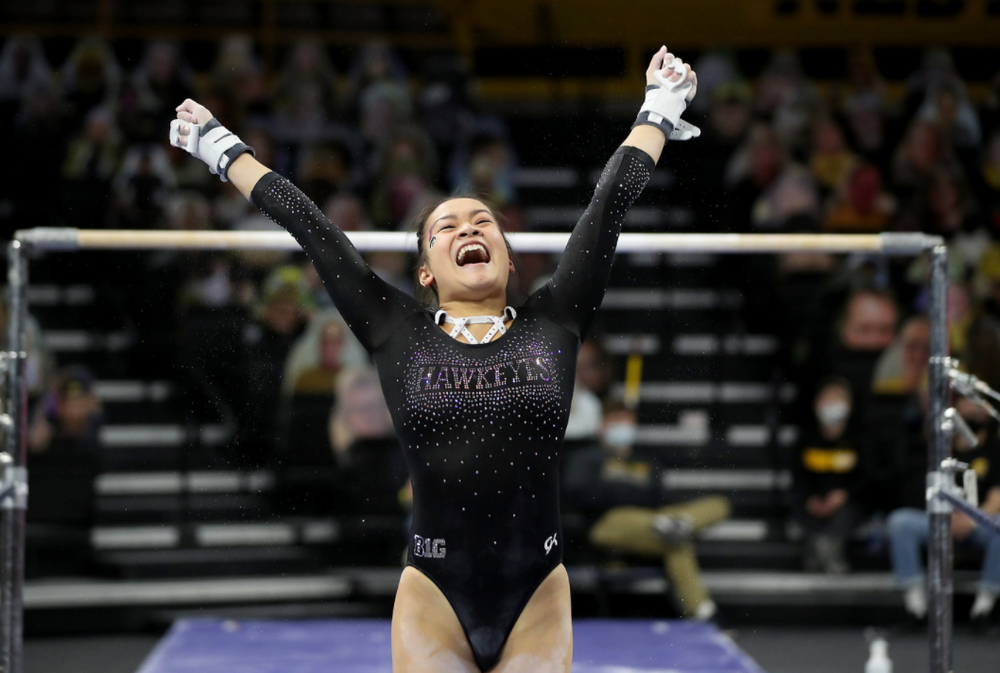 B1G WEEKLY HONOREES
• Senior Clair Kaji was named the Big Ten Specialist of the Week on Jan. 25 after sharing two event titles against No. 13 Ohio State. She posted a 9.875 on beam and tied a career-high for a second consecutive week with a 9.925.
• iowa City native Adeline Kenlin earned her first Big Ten Freshman of the Week honor after sharing the bar win with senior Emma Hartzler. The duo both posted a 9.875 on the event. She also tied for third on beam posting a 9.825 as the Hawkeye anchor in the event.
• Junior Lauren Guerin was the Big Ten Specialists of the week on Jan. 18 after sharing the floor title at Minnesota. She posted a 9.950 for the fourth time in her career.

UP NEXT
The Hawkeyes return home to host Minnesota on Feb. 6 inside Carver-Hawkeye Arena. The meet will start at 3 p.m. (CT) and will be televised on ESPNU