IOWA CITY – The University of Iowa men’s gymnastics team claimed five event titles, including the all-around, to post a 402.000-400.500 victory over fourth-ranked Illinois on Saturday night at Carver-Hawkeye Arena.   The Hawkeyes went 1-2 in the all-around with junior Evan Davis claiming the top spot with a score of 81.700.

“From the Minnesota meet, we had a lot of goals and things we needed to work on in two weeks,” said Davis. “Coming into the meet, beating Illinois and scoring over 400 was proof of that work paying off. I am proud of that.

“This season, for me, is more about the team coming together as a tight-knit group of brothers and going out and competing and having fun. That was the most fun I’ve ever had at a meet.”

Along with winning the all-around, Davis was the individual event champion on horizontal bars with a 13.500.  Senior Bennet Huang, who was the runner-up to Davis in the AA competition, won on pommel horse (13.700), sophomore Amari Sewell won on vault (14.500), and sophomore Carter Tope and junior Stewart Brown shared the title on parallel bars (13.800).

“I’m having a pretty good time with these guys this year and you can see them also doing so. They’re competing well together, they’re doing it in the gym, and they’re doing it with the hard work that it takes to do this.

“They’re performing above and beyond what you would’ve anticipated given all the baggage we brought into this season. The cool thing is they got over it and they’re setting goals and trying to accomplish them.” 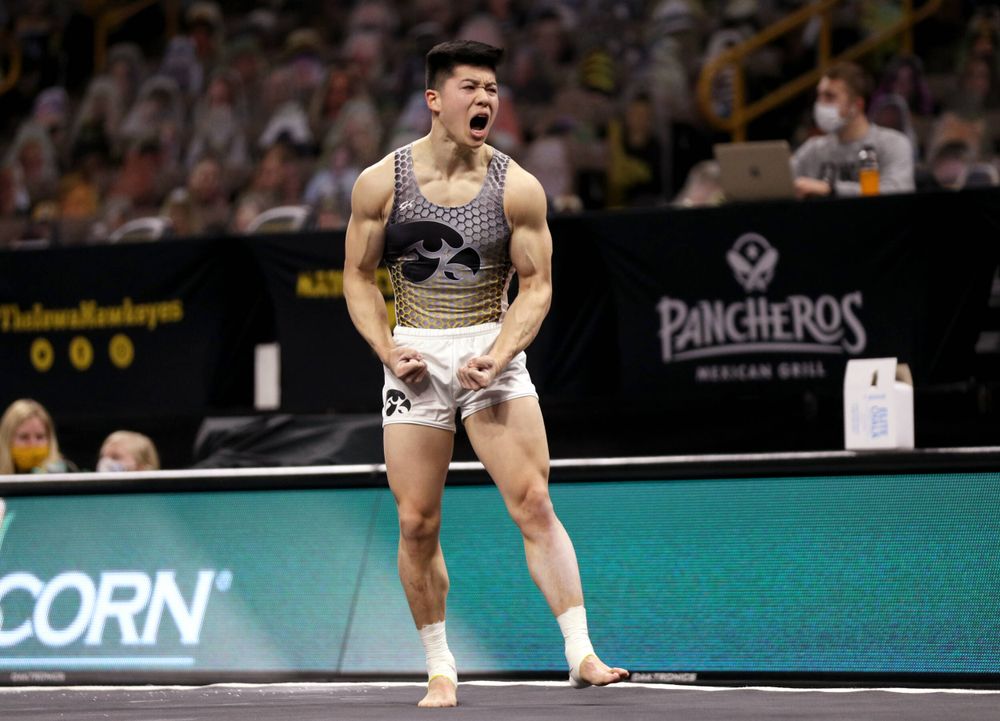 Davis was the runner-up on floor with a 14.1000, while Huang finished third at 14.00.  Freshman James Friedman impressed with a career-best 13.800 and a fourth-place finish. Iowa had a team total of 68.300, which was the seventh-best score in school history.

Huang shared the team title with a 13.700 to lead the team, while Davis finished third with a career-best 13.400. Friedman scored 13.200 in his first time competing on pommel, which was good for fourth. Sophomore Amari Sewell and junior Drew Helberg had career bests of their own with 12.150 and 13.100. The team finished with a total of 66.500.

For the second-straight meet, Sewell took the vault title with a score of 14.500. Senior Kulani Taylor was fourth, posting a 13.950. Davis joined Taylor in fourth with a score of 13.950 toward his all-around total. The Hawkeyes ended with 69.450 on vault.

Tope and Brown posted a 13.800 to tie atop the parallel bar standings. Hobson finished with a career best of 12.200, while Friedman added another event to his early Iowa career, scoring an 11.550 in the fifth rotation.  Iowa posted a 66.200 as a team.

Davis closed his impressive night by claiming the title on horizontal bars with a 13.500. Alex Walther topped his score from two weeks ago to finish third with a score of 13.100, while Tope joined Walther in the three position with a new career-best.  Noah Scigliano found himself in fifth after putting up a season best of 13.000, adding to the team total of 65.560.

The Hawkeyes will be back inside Carver-Hawkeye Arena at 6 p.m. (CT), hosting Penn State on Feb. 20.