THIS WEEK
The seventh-ranked University of Iowa women’s gymnastics team will travel to Lincoln, Nebraska, to face the 39th-ranked Cornhuskers on Saturday night at the Devaney Center. Action is set to begin at 7 p.m. (CT). Due to the coronavirus pandemic, there will be no general admittance to the meet.

WHAT YOU NEED TO KNOW
•The GymHawks are 4-1 overall (4-0 in Big Ten) and are seventh in the Road to Nationals rankings with an average score of 196.580. The Hawkeyes started the season ranked 25th before climbing to No. 9 for three straight weeks. Iowa’s No. 7 ranking is the highest in school history.
• The Hawkeyes posted three season-high scores in the victory over No. 29 Maryland en route to a score of 196.775. The score is tied for fifth-best in school history and is the second highest by the program since 2004.
• Iowa currently has a No. 1 national ranking and leads the Big Ten on floor with a 49.400 average. Clair Kaji is currently No. 3 in the Big Ten and is 13th nationally on floor with an average of 9.905. Iowa set the program record with a 49.600 against Maryland.
• The Hawkeyes are first in the Big Ten and sixth nationally on balance beam and 17th in the country on uneven bars.
• Iowa posted a season high on vault, tallying a 49.050 against No. 29 Maryland on Feb. 13.
• Iowa has earned six Big Ten weekly honors through the first four weeks with Lauren Guerin, Clair Kaji, and Adeline Kenlin all being multiple award winners. The Hawkeyes had a record seven weekly honorees during the 2004 season.

A START FOR THE AGE
The Hawkeyes are ranked No. 7 in the national rankings, which is the highest in program history. Iowa started the season ranked 25th in the preseason poll before jumping 16 spots to No. 9 in the rankings following a season-opening 196.450 at Minnesota.
• Iowa posted its highest score of the season and its highest score under Libby — a 196.800 — in a come-from-behind victory over No. 11 Minnesota. The score is the highest since 2004.
• The Hawkeyes followed up the score with a 196.775 against Minnesota and Maryland. The score was tied for fifth all-time.
• Iowa’s 196.450 was a high under Larissa Libby in a season opener and in the month of January. Iowa followed it up with a 196.550 in the decisive win over No. 13 Ohio State.

Q’S SCHOOL RECORD
Sophomore JerQuavia Henderson tied a school record on floor, scoring a 9.975 in Iowa’s tri-meet against Minnesota and Maryland. The Illinois native received a 10.000 from one judge en route to her career-best score. It tied Alexis Maday and Stephanie Gran for the school record, which was set during the 2004 season. 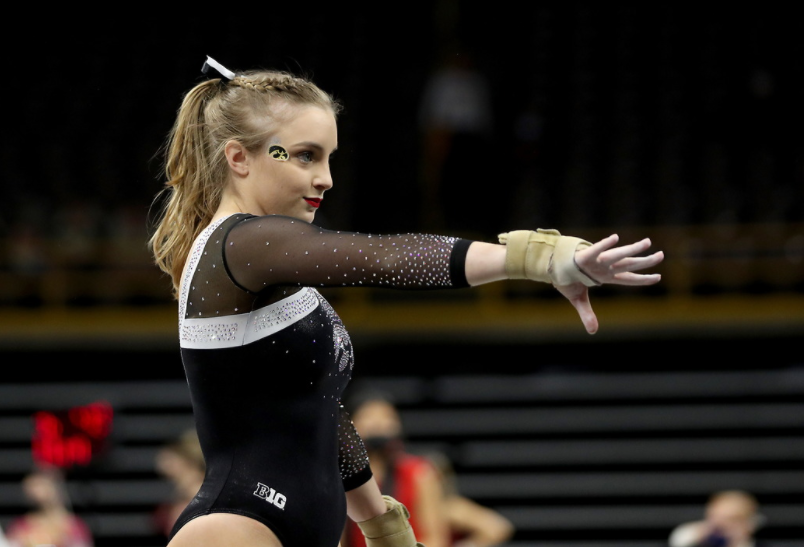 CONSISTENT LAUREN
Junior Lauren Guerin posted a 9.950 on floor for the second consecutive week and the third time this seasonin Iowa’s tri-meet against Minnesota and Maryland. Guerin has achieved the 9.950 score six times in her Hawkeye career.

HAWKEYE NOTABLES
• Freshman Adeline Kenline scored a 9.925 on beam — a career-best — to finish as the beam runner-up against Maryland and Minnesota.

HENDERSON’S ALL-AROUND
Sophomore JerQuavia Henderson is the only Hawkeye to compete in all-around this season. The Illinois native posted a career-best — a 39.325 — in her debut at Illinois en route to the all-around win Henderson has a 39.275 average, which puts her seventh in the Big Ten and No. 23 nationally.

UP NEXT
The Hawkeyes will travel to Ann Arbor, Michigan, to compete in the Big Five Meet on Feb. 26 inside Crisler Arena. Joining the Hawkeyes at the meet are Michigan, Michigan State, Penn State and Rutgers.